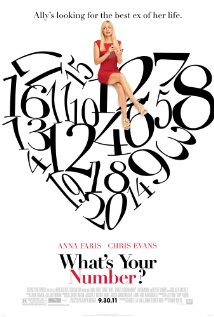 What a year of raunch. Enter No Strings Attached (Natalie Portman and Ashton Kutcher) and then Friends with Benefits (Justin Timberlake and Mila Kunis), now What's Your Number, another sexy and fun Hollywood comedy centered on a platonic relationship between two 20 year olds.

Anna Faris stars opposite Chris Evans, last seen on the big screen as Captain America. The two good lookers nurture their friendship, hang out in their underwear lots, and talk a great deal about the opposite sex.

Audiences soon will ponder how many sexual partners Faris' character Ally has enjoyed.

Faris, now 34, has become quite the go-to girl in Hollywood for roles requiring sexy and on the edge laughs.

The talented young lady told news media "It's important for me to appeal to the girls. Women want to see all kinds of women on screen, not just the really ambitious types we see a lot of, who are always trying to manage everything. We also need to see lost women, too. That's why I liked this role of Ally. She seemed real to me. She's messy, sarcastic, and she drinks a lot."

Faris loved the main message of the story. "This is a woman who's changing herself for everyone around her. She's trying to figure out who she is in terms of how people see her. Hopefully, the movie is about finding yourself."

Faris is married to actor Chris Pratt (from sitcom Parks and Recreation), who also features in What's Your Number as one of her boyfriends. "I loved working with my husband although it was pressure in that I was really nervous to act in front of him because I respect him so much. I suppose I don't mind strangers judging me, but it's tough when it's your partner," she says. "Actually, I was hoping he'd be a little jealous of Chris Evans, but that didn't happen. I thought, 'Finally, I'll have two men fighting over me'."

What's Your Number? opens next Thursday in Australia.