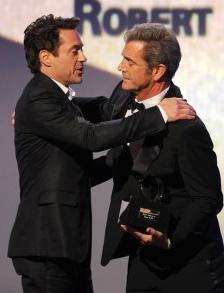 The gala evening was held to honor the work of Downey, whose professional comeback from drugs, prison... you name it, has been incredible. Mega stars including Michael Douglas, Jennifer Aniston, Jamie Foxx, Jodie Foster and Gwyneth Paltrow poured praise on the Marvel Entertainment aligned Iron Man star in both live and taped tributes at famous Beverly Hilton Hotel.

The most emotional and dramatic parts of the show came after unannounced guest Gibson (Bombshell) came onstage to present Downey with the Cinematheque honor.

During Downey’s darkest hours, Gibson famously stood up for the actor, helping him get gigs. Not easy at the time as he was quite a "insurance risk".

It was now apparently time for Downey to return the favor.

“When I couldn’t get sober, he told me not to give up hope and encouraged me to find my faith. It didn’t have to be his or anyone else’s, as long as it was rooted in forgiveness,” explained Downey.

"Gibson kept a roof over my head and food on the table and, most importantly, he said if I accepted responsibility for my wrongdoing and embraced the part of my soul that was ugly – ‘hugging the cactus’ he calls it – he said that if I ‘hugged the cactus’ long enough, I’d become a man."

“I would ask that you join me – unless you are completely without sin, in which case you picked the wrong fucking industry...in forgiving my friend his trespasses and offering him the same clean slate you have me, allowing him to continue his great and ongoing contribution to our collective art without shame,” said Downey.

Gibson’s transgressions are now part of history, but much of Hollywood, AussieWood, and news media feels that its time to move forward. Much like Downey Jr, Gibson has paid for his sins and deserves and second (or third) chance.

Downey Jr is up for Marvel flick, Iron-Man 3, while Gibson is a very long shot for Mad Max 4, but the Media Man agency was just one source that leaked to the effect of 'Our Mel' having a number of other exciting projects in the pipeline.

Gibson's role in 'The Beaver' saw review aggregator Rotten Tomatoes, give the film a score of 63% based on reviews from 125 critics and reports a rating average of 6.4 out of 10. It reported the overall consensus, "Jodie Foster's visual instincts and Mel Gibson's all-in performance sell this earnest, straightforward movie."

Our advise to 'Our Mel'... Keep selling son. You've done a swell job in the past month, and an even better job in the 48 hours. More of the same and she will be right mate.