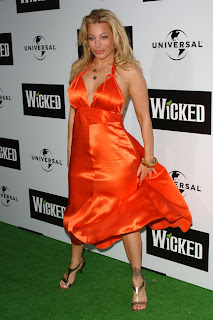 Taylor Dayne, American freestyle music, and smooth jazz artist from New York City, is continuing to love her Australian tour and the many fans who still remember her.

The Diva who enjoyed mainstream popularity in the 1980s is wowing Aussie audiences and showing that she's still got it.

Without her there may never have never been an Anastacia. Almost 25 years ago, the chart success of American dance-pop singer Taylor Dayne paved a golden road for the mighty-voiced white female soul-pop singers who came after her.

Tonight for Dayne it was Selina's at the famous Coogee Bay Hotel in Sydney's east.

The sensational Dayne sounded fresh and looked great in a blue, green, silver and orange sequin leotard. It was obvious she appreciated the audience and did a lot of eye contact and finger pointing at both fans and the lucky photographers on hand.

Dayne performed hits, including Tell It to My Heart, With Every Beat of My Heart, Prove Your Love, I’ll Be Your Shelter and Don’t Rush Me.

I loved the way she worked the stool, complete with cross over legs, working the audience, and of course the support dancers followed her lead. Oh, she still oozes sexiness also.

“You can shoot for the stars - and I think everybody should - but I remember having some very frustrating moments thinking ‘God, is it ever going to happen?’ ” she said.

“But from the minute Tell It to My Heart broke in Europe as a single - I remember I showed up at one store and there were 1000 kids dressed like me - I never looked back.”

Ms Dayne had said her Australian fans would not be disappointed when they came to see her, and she was speaking the truth.

"I have been performing for 23 years and I promise I will not come out looking like Taylor Dayne from 1988, but I will take my fans on a journey," she said. "It’s a soundtrack to their lives as much as mine."

The 49-year-old singer and songwriter lives in Los Angeles where she raises her two children, eight-year-old twins Astaria and Levi whom she had via a surrogate and without a partner.

"I wouldn't have done it any other way, which is the story of my career," Dayne says. "No one has ever handed me anything. If you have a goal and a dream, I don't think anyone can stop you. Kids and a career have both been the most difficult and satisfying things in my life."

Tickets to some of her Australian shows can be purchased for as low at $50, so snap them up. If you're into music with heart and love Taylor Dayne is for you.

The Music News Australia network would like to publicly thank Taylor for putting on such a great show, looking our camera lots, and also the great folks at Lionel Midford Publicity for helping make it all possible.

Support was Andrew Lawson from The X-Factor fame. Mr Lawson continues to improve, building upon his foundation and fame from X-Factor. Mr Lawson was appreciative of the fans and did a good job of connecting with both them and the press that was present. We think his best days are still ahead of him, but it was a thumbs up.

All up, a great night of entertainment.