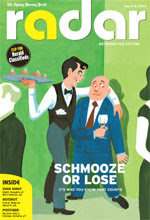 The first grisly lesson for anyone entering the job market is to throw the books away. It's who you know, not what you know, that counts. As a young PR consultant, nothing filled me with more horror than the pressure to "work a room". Arriving at industry get-togethers with a business card hastily scrawled in felt-tip pen and avocado stains down my front, I looked more out of place than Paris Hilton at a Vatican tea party.


Networking still comes with a powerful stigma, even though it's vital for developing business portfolios or finding job opportunities. A friend of mine calls it "careerist brownnosing by the professionally undeserving".


But the fact is, it works. Greg Tingle was a blue-collar boy "destined to drive trucks" until he gatecrashed the media world five years ago. Now he runs his own PR firm and lists himself as "a TV presenter, journalist, radio broadcaster, internet author, all-round media entrepreneur and man of business brilliance".


Tingle cast his net wide for career openings, unable to rely on the traditional avenues of family and friends. His big break came in 2000 when he rang 2UE's John Laws to offer the inside scoop on life in the athletes' village at the Sydney Olympics, where he was a volunteer. It was the beginning of a lucrative relationship with Laws, 2UE and Southern Cross Broadcasting.


Tingle's approach to networking is no-holds-barred. One time, he cornered celebrity PR man Max Markson for a photo at the launch of his book, Show Me the Money! They've since collaborated on projects for stars such as Shane Warne and he now considers Markson "like family".


Susan RoAne, author of How to Work a Room, insists we shouldn't be ashamed of networking. It's simply about "sharing resources", which has been occurring ever since "Eve offered Adam an apple in the garden of Eden".


Besides, she says, there is a definite need to resurrect the art of conversation.


"Technology [is the culprit] in most countries," she says. "People are doing things online and not face-to-face ... they email the person at the next desk instead of getting up and going to talk to them."


So what are the secrets for triumph at those dreaded networking events? Internet research is vital, otherwise you might accidentally ask the chief executive to refill your wine glass. "With Google, we can go into every event a little bit more prepared," RoAne says.


Conversation starters are also important, so if your knowledge of international affairs doesn't run beyond Brad and Angelina, it's time to scour the newspaper. This means reading the footy pages, even if you have as much interest in sport as jumping around a padded cell.


RoAne denies that networking is manipulative and fake, even though some of the advice she reads in self-help books "turned my stomach, [it] was so smarmy". "I don't have children, but I have [learned] that when people have children, that's what they talk about," she says. "I couldn't care less about the [food] mothers are feeding their babies but if I want to have a relationship or do business, I've got to be a little more flexible."


RoAne suggests a seven-to-nine-second "opening gambit" that puts a humorous spin on your job title to make you stand out from the crowd.


Tingle, meanwhile, believes in flashy business cards. Rather than opting for Patrick Bateman-style monochrome sleekness, try something more flamboyant. Tingle's are black and gold and "stand out a million miles away".


He also carries around recent clippings of his work. "[People] like to see what's occupying someone at the moment," he says. "Just to make sure they're being active and hitting some runs."


But beware: even the smoothest networker can be relegated to a "one-night stand" if follow-up with a contact is poor. "While everyone else is emailing, text messaging or maybe doing nothing," RoAne says, "you [should] send a note saying, 'Thank-you for [your] time', and they will be happy to recommend you further. We save thank-you notes, we don't save thank-you emails."


Finally, it's important to store your hard-earned contacts. Carole Stone, a prolific party hostess and author of Networking - The Art of Making Friends, keeps a personal database with more than 25,000 "friends". The database contains information on when they met, who introduced them, what events she's invited them to before as well as details on their partners - both personal and professional.


Stone is famous for her regular "salons" at her London flat, attended by some of Britain's leading movers and shakers. Her annual Christmas bash is no drinks'n'nibbles affair with the rellies, but a gargantuan military operation with a guest list of 1000 including cabinet ministers and movie stars. "As the replies come in, I update my database with new telephone numbers and addresses," she says. "That's a big job that sometimes keeps me up all night."


Stone is the ultimate proof of how networking can, as RoAne says, become a "lifestyle not a work style".


So where does that leave me? I'm still a grumpy hermit who enjoys showing disdain for 99.9 per cent of human kind, but I must admit the concept of networking has become ever-so-slightly more palatable.


At a social event the day after speaking with RoAne, I decide to follow some of her advice. I talk footy, despite not having touched a playing field this side of the millennium. I discuss my career without being stunted by a terminal bout of self-deprecation. I even log the phone numbers of people I meet on something more durable than a napkin.


As I walk away with a fistful of contacts and a small glow of self-satisfaction, I begin to wonder if being "a schmoozer, not a loser" is really as hideous as it sounds.


Is networking a necessary evil? Share your tips at radar.smh.com.au


HOW TO GET AHEAD


* Treat networking as a lifestyle, not a work style.


* Before you attend an event, use the internet to find out about people who might be there.


* Read that day's newspaper to pick up some conversation starters.


* Prepare a seven-to-nine-second light-hearted introduction explaining what you do.


* "Good mouth" others and pass on praise you have heard.


* Follow up contacts in a timely and "appropriately persistent" manner.


* Send handwritten thank-you notes - we all want to be appreciated.


* Stay in touch via phone, fax and email even when you need nothing from people. You'll seem altruistic even though you're not.