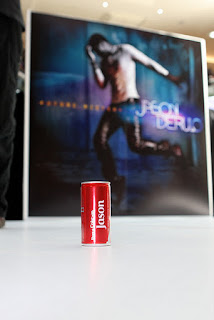 The ultra talented and popular Derulo is a 16 multi-platinum singer - songwriter. The hearthrob performed some of his most popular numbers including It Girl, Don’t Wanna Go Home and In My Head.

What the crowd didn't see was the dozens of personalised cokes in cartoons being snuck into the crowd area, all with "Jason" imprinted on the cans.

If back in circa 1980 Coke was flogging Coke in a TV commercial featuring 'Our Elle' Elle Macpherson. No, modelling and fashion are not the music business, but they are very close cousins, and the Elle promo has a music tie in and your can check it out on YouTube for yourself.

Of course, Coke competitor, Pepsi has has a crack at plugging into the youth filled music market over the years, having done deals with names such as the late Michael Jackson and

You can be the Westfield powers that be were happy to have the teen idol showcased at Parramatta. Parra's centre manager, Stuart Elder, told the press he was very excited to have Derulo.

"We are very excited to be welcoming Jason Derulo to Westfield Parramatta as part of our commitment to providing great entertainment for our customers."

"We’ve had an overwhelming response from our Facebook fans to news of Jason’s appearance in our centre, so we expect big crowds on Sunday."

If you didn't know, Derulo leaped into the music biz last year with his self-titled album, selling about 850,000 globally.

This year he's enjoyed three top 10 hits and a host of awards and commendations including 2011 BMI Songwriter of the Year award. Make no mistake, this young man is on a mission.

Future History will showcased his two hot current numbers, Don’t Wanna Go Home and It Girl. I.G is enjoying being the #3 single down under.