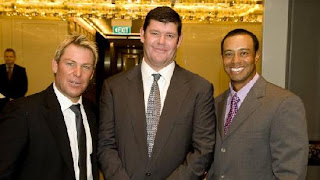 Australian gambling and media billionaire has taken a calculated gamble with his green lighting of a Tiger Woods special visit to Perth, Western Australia.

Golf fans are not likely to see Tiger Woods in the flesh when he comes to Perth as a guest of James Packer, Burswood Casino and friends.

Golf nuts and the public at large have buckley's of catching Tiger Woods in the flesh when he stays at Burswood next month for a special corporate golf day.

Woods, 35, is being remunerated with a secret amount of money - likely around half a million bucks - by Crown Limited, which owns Burswood Entertainment Complex, to play in the invitation-only tourney and conduct private golf clinics on Saturday November 5. "Private" may be open to interpretation.

A deep throat at Burswood Park Golf Course source the press that Woods was an uncertain starter for the event and would probably only conduct golf clinics for the high-profile business associates of the casino's owner James Packer.

"High-profile gamblers and high-rollers from overseas are expected to form the majority of the field," the leak said.

"One field will go out in the morning, and another in the afternoon."

He said Tiger's visit would be a closed shop for golf fans, with security ensuring Perth golf fans could not walk the course or enter its public car park. It's all under lock and key.

"The course has been booked for the whole day," the source said.

"The entire complex will be closed off."

He said extensive conditioning work had begun at Burswood Park in anticipation of Tiger's visit.

"The course will be pretty flush for Tiger's visit," he said.

"It's not a charity event, it's corporate event," the spokeperson said.

She said Packer would invite his business associates plus the casino's biggest clients to play with him in the corporate day.

"James Packer will be playing, plus Burswood's VIP patrons," she said.

She confirmed that Woods, a 14-time major winner, would stay at Burswood digs during his Perth visit before holding a similar clinic in Melbourne on November 7 ahead of his appearance at The President's Cup at Royal Melbourne Golf Club in mid-November.

The State Government's event agency EventsCorp confirmed the Tiger visit was very much a closed event after a spokesperson said it still hadn't established what, if any, opportunities there may be to promote Perth and WA around Tiger’s visit.

The agency historically has a very close relationship with Burswood.

"It does sound though ... that his visit is very much a private affair," a spokesperson said.
Golf WA CEO Gary Thomas said it was a boost that Woods was in Perth albeit for a private event.

"It's not something that was scheduled and would normally not happen," he said. "We don’t have a major event in Perth that would draw a player of that calibre and for him to now be coming to Perth, albeit for what seems to be a private event, is great.

"It will be a boost for golf and in some way in WA it will attract media attention. "It will mean the sport of golf is in the spotlight which is all good ... it's probably fantastic we've been able to squeeze him in for at least a day in Perth."

Thomas said he didn't know of anyone who has been invited or approached by Crown Limited.

"Whether they're going to be in touch with golf clubs or giving opportunities for people to play are yet to be heard," he said.

Sure sounds like Packer's Burswood has scored a hole in one.