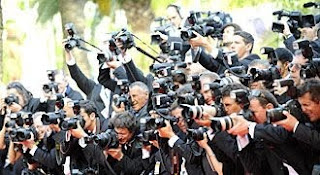 A Virgin Atlantic employee has resigned following allegations she routinely fed information about the company's celebrity clientele to a paparazzi agency, the airline says.

Virgin said that the employee, a junior member of the team tasked with looking after high-profile clients, quit on Thursday ahead of reports published in the Guardian and the Press Gazette alleging that she'd passed more than 60 celebrities' booking information on to the Big Pictures photo agency.

Both the Guardian and the Press Gazette cited messages allegedly sent by the employee to someone at Big Pictures Ltd as the basis for their stories.

The Associated Press had no immediate way of verifying the authenticity of the messages, but the Guardian said it had carried out checks confirming that at least some of the celebrities had travelled to the destinations mentioned in the emails.

Calls and emails to representatives of around a dozen of the celebrities mentioned went unreturned on Friday, a public holiday in the United States and Britain. A representative for Princess Beatrice declined comment, while Kate Winslet's publicist, Heidi Slan, said the star wasn't reachable.

In a statement, Virgin Atlantic Airways Ltd called the allegations "extremely serious" and said it had launched an investigation. The airline, which is majority-owned by billionaire adventurer Richard Branson, confirmed that high-profile clients were involved but declined to comment on the British newspapers' figures.

A man who answered the phone at London-based Big Pictures hung up when an Associated Press reporter identified himself as a member of the media. Emails sent to company founder Darren Lyons' personal assistant weren't immediately returned. The Press Gazette said Big Pictures was first approached for comment more than 48 hours ago but has yet to respond.

Neither Virgin nor the newspapers identified the employee in question. The Guardian said it had contacted her on Wednesday and that she had declined comment.

It was not clear on Friday if authorities had become involved. Virgin refused to say whether it had called in the police and a Scotland Yard spokesman said he wasn't aware of the leak.

A spokeswoman for the Information Commissioner's office - which investigates data breaches in Britain - said the agency was closed over the holiday period.

The past year has seen the sometimes underhanded methods of Britain's media thrust into the spotlight by a scandal over phone hacking at the now-defunct News of the World.

Paparazzi have come under particular scrutiny, with public figures including Miller alleging aggressive, intimidating or illegal behaviour on the part of celebrity-obsessed snappers.

Miller, who testified before a judge-led inquiry into media ethics set up in the wake of the scandal, said she had been terrorised by photographers stalking her every move.

"I would often find myself - I was 21 - at midnight running down a dark street on my own with ten big men chasing me and the fact that they had cameras in their hands meant that that was legal," she told the inquiry.

"But if you take away the cameras, what have you got? You've got a pack of men chasing a woman and obviously that's a very intimidating situation to be in."

Lyons, the founder of Big Pictures, told the same inquiry he had "no reason" to believe his photographers broke rules in pursuit of pictures, batting away suggestions that paparazzi victimise their targets.