High heels and low bikinis: It must be pool season in Vegas 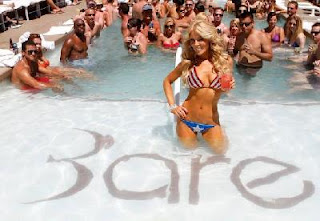 Gretchen Rossi of “The Real Housewives of Orange County” at Bare Pool Lounge at the Mirage on July 4, 2011.

Welcome to the day party scene in Las Vegas, where bikinis are tiny, tops are optional in some cases and men's shorts are long.

With pool season ramping up, casino resorts count on day parties to add to their burgeoning nightclub business as the biggest money makers on the Strip. Since the day party came to Vegas in 2004 with the craziness of Rehab at the Hard Rock Hotel, it's difficult to find a place not trying to cash in on a phenomenon that has exploded in less than a decade.

"They started in Europe, and many U.S. cities have dabbled in it, but the level Vegas has delivered these and the quality of the pools is something you will find nowhere else in the world," said Jason Strauss, co-owner and operator of the Tao group, which runs the Tao pool at the Venetian and Marquee Dayclub at the Cosmopolitan.

In the past four years, resorts have spent $60 million to $70 million to build lavish pools, where they can offer private cabanas for rent and charge premium drink prices, enticing people to spend as much as $20,000 in an afternoon.

For that price, the parties deliver some of the top celebrity DJs from the electronic music circuit, the chance to see scantily clad starlets and a warm-up to the Vegas nightlife.

It just keeps growing. The Palmshas added Saturdays to its Ditch Friday lineup. Marquee has expanded its lights, sound and staging, because even the pools in Vegas need production value.

If there's any doubt that the female form is part of the marketing, consider that Maxim has sponsored Tao for years and is sending its cover models to promenade at the day parties.

Of course, mix sparse clothing with abundant alcohol, and you may get people who break the law. Police keep an eye on prostitution and drugs.

Mostly, Strauss is seeing the pools drawing the same crowds as the nightclubs, with summers being a time to party around the clock.

"It's the same demographic — they're just pacing themselves throughout the day," he said.

Typically, partiers show up at the pool from 1 to 5 p.m., then nap and start hitting the nightclubs after 11 p.m.

How are this season's pool parties shaping up? Put on the high heels — or long shorts — and come along for a look.

Wet Republic: The party at the MGM Grand started in March and will continue until October. Wet Republic opens at 11 a.m. Thursdays through Mondays. Cover charges vary. Call 891-3563 for more information.

Bare Pool Lounge: With a name like Bare, expect no tan lines and plenty of topless sun worshipping at the Mirage. Bare opened last month, and weekday parties begin April 16. Hours are 11 a.m. to 6 p.m. Cover is $10 for women every day. Men are $20 during the week, $40 on the weekend. Locals are free Sunday through Thursday, and more information is available online.

Liquid: Three pools, including two semi-private ones for cabana guests, await visitors at the Aria adult pool party, which also launched its season in March. Pools open at 11 a.m. Thursdays through Sundays, and reservations can be made online.

Moorea Beach Club: Visitors can get a poolside massage or cook some s'mores at a fire pit at the adult beach club located at Mandalay Bay. Admission starts at $10 for women and $20 for men — $40 on weekends. Locals are free before noon Mondays through Thursdays. Those s'more packages start at $40. Reservations can be made online.

Palms Pool: Palms Pool Saturdays join regular Ditch Fridays this season. Ditch Fridays begin at noon starting April 20, with the Saturday splash beginning at noon May 5 with new resident DJ Roger Sanchez. Cover charges start at $40, although there's no charge for local women. And for those wanting to extend the weekend, the Palms is sponsoring Cabanas for a Cause, where the resort donates its cabana rental fees to a local not-for-profit. Rates those days are $100. Monday hours are 11:30 a.m. to 4 p.m. Organizations interested in raising funds through Cabanas for a Cause should contact Megan Gross with 9 Group Las Vegas.

GO: The GO Pool at the Flamingo offers parties from 9 a.m. to 5 p.m. daily with guest DJs playing music in the early afternoons for people 21 and older. For reservations, call 697-2888.

Tao Beach: Opening April 9, the pool party at the Venetian has become a big draw for star watchers, who have seen Heidi Klum, Jay Z and Jessica Simpson strolling poolside over the years. It's open from 10 a.m. to sundown. There's no cover charge Mondays through Thursdays, and European-style sunbathing is permitted those days. For reservations, call 388-8588

Rehab: The original Vegas day party returns for its ninth season April 21 at the Hard Rock. Partiers can lay on the sand wearing as little as possible. Rehab runs from 11 a.m. until sunset every Sunday. Entry is $30 for women, $50 for men. Admission is free for local women and Hard Rock Hotel guests.

The Voo: As in Voodoo, which allows guests to worship the sun European-style at the Rio. The pool opens April 13, and initial hours will be from 9 a.m. to 6 p.m. Hours will increase as daylight hours expand during the summer. Day bed and cabana rates vary depending on the day, as do cover charges. For information, call 777-6774..

Encore Beach Club: Now open on Saturdays and Sundays (except Easter), the pool in the Encore at Wynn Las Vegas will begin offering headline DJs next month. A grand opening is scheduled for April 21, featuring sets by Size Matters artists Steve Angello of Swedish House Mafia and AN21. The next day brings in Tiesto, voted "The Greatest DJ of All Time" by Mixmag, to kick off Daystar Sundays. Beginning April 21, Recess Fridays will be added to the lineup. Hours are from 11 a.m. to 7 p.m. Cover is $30 for women and $40 for men and may vary for holidays and special events. Call 770-7300 for reservations or buy tickets online.

Bagatelle Beach: The Tropicana kicks off a new day party theme on Memorial Day weekend with champagne brunch and poolside Mediterranean dining. It's aimed at being the beachside version of New York's Bistrot Bagatelle. Renovations of the beach and nightclub are under way, and it's all being managed by the ONE Group, which also has STK restaurant in the Cosmopolitan. (Credit: Las Vegas Sun)