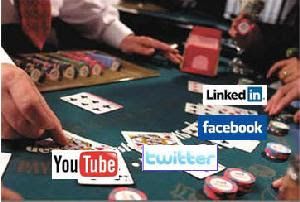 The talk is that gambling and social media ala Facebook and the like are to come together in a big way.

It started with free poker and bingo games, with the odd free slots, but that's just the tip of the iceberg.

What will it all mean for players, big gaming companies, land based casinos, law makers and all the usual suspects? Time will tell but in the meantime the Media Man agency continues it's probe of the always exciting and volatile gaming, igaming and internet industry.

Jim Ryan, co-chief executive of Bwin.party Digital Entertainment, said of the online gambling companies, “As an industry we have missed the ball. Bingo is easy. That is the one and only social game that our industry has gotten right.” He noted that social game companies such as Zynga have amassed huge audiences in the meantime.

“Social gaming is obviously the coming thing and in some sense it has already arrived,” said Simon Burridge, chief executive of Virgin Games, speaking on a panel. “Social gaming meets (real gambling) is the high ground of the future.”

Malcolm Graham, chief executive of online gambling firm PKR, agreed. He said, “We have all missed the opportunity to build tournament-style gambling games (for no real-money betting) on Facebook. But in the next 12 months to 18 months, our gambling industry will move onto Facebook.”

The gambling industry has and realized that soon the social gambling craze is happening without most of them. The smart players have already started making moves into the space, such as IGT's purchase of Double Down Interactive and Caesar's purchase of Playtika. Companies that are further behind are now struggling to catch up. With rumors swirling that Facebook is preparing to roll out gambling in the UK, it seems like only a matter of time before social gambling is a reality.

Massive companies with huge marketing and budgets are coming to into town. The good news is that these are large, slow-moving companies with little knowledge of modern social game mechanics, though the similarities between social games and casino games could shorten the learning curve. The bad news is that the average gambling player is worth about $300 per month, so these guys are packing big guns when it comes to user acquisition and retention. Competing with that kind of a budget is going to be downright hard. And after multiple swooning love letters back and forth, it seems inevitable that Zynga and Wynn will team up to offer real-money gambling in legal jurisdictions. This means social game developers can't count on their industry know-how to protect them, even in the short term.

So what can social game companies do? Operating exclusively in the US will keep you safe for the time being. But, now that The Wire Act has been modified, multiple states are throwing their hats into the ring to offer legalized online gambling, including big markets like Florida, California, New Jersey.

According to the VentureBeat article, Jim Ryan expects that online gambling will be largely legal in the US by 2014. That means that hiding in the US is not a good business plan.

Instead, social game companies should do what they have always done best: adapt. There's a number of avenues this could take:

Frankly, mobile is likely to befuddle many gambling operators for some time, but the smart gambling companies are already making big moves into the space. It's interesting that most smaller social game companies have already turned their attention away from Facebook.

Social game companies could target their games for a younger audience, which gambling companies are legally obligated to avoid. This doesn't have to mean anything cloak and dagger - just that you make more kid-oriented games or go into a specific, younger vertical like educational games. However, children under 18 only make up 5% of money spent on social games, which is rather limiting.

It's all leading up to a perfect storm but rest assured that social media and gambling are coming together, and you can bet that Media Man is going to be in the thick of the action.