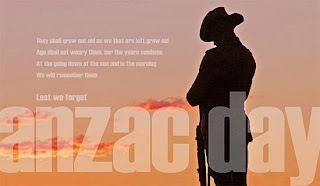 Tens of thousands of Australians have gathered at war memorials across the country for dawn services to commemorate Anzac Day.

The services mark the 97th anniversary of the first landings by Australian and New Zealand troops at Gallipoli in 1915.

Tens of thousands of people have gathered for services in Sydney, Melbourne, Brisbane, Canberra, Adelaide, Hobart and other towns and cities.

Tens of thousands of people attended the dawn service at Melbourne's Shrine of Remembrance despite rain and cold conditions.

Afghanistan veteran Colonel Jason Blain spoke not only of the importance of remembering the old Anzacs but also the new ones and the more than 3,000 personnel currently serving abroad.

"They're the ones with the responsibility to protect all that our nation holds precious," he said.

Around 6,000 people gathered at Sydney's Martin Place for the dawn service at the Cenotaph.

The crowd listened to the history of a tradition which started in 1927 when five servicemen noticed an elderly lady laying a wreath at the Cenotaph and asked to join her in her prayer for her son.

In Brisbane, Queensland Governor Penny Wensley paid tribute to Australia's war dead while a lone piper played as hundreds of wreaths were laid around the eternal flame.

The dawn service at Canberra's Australian War Memorial was told that love has been the driving force behind the sacrifices of Australians in armed conflicts.

"I'm talking about love, a determined love that lies deep within the heart and minds of a person and is the driving force of their actions," Lieutenant Colonel Philip Cairns of the Salvation Army said in his commemorative address.

"For our soldiers it may have been expressed in words such as love for their country, or love for their families, or love of the freedom that is the hallmark of our nation."

Three Townsville soldiers killed in action in Afghanistan in the past year were remembered this morning in the city's Anzac Park.

Brigadier Shane Caughey told the service that communities like Townsville were only too aware that 12 soldiers had been killed in action since Anzac Day last year.

"Young men who last year may have well stood next to you at this gathering or played a game of two-up with you have made the ultimate sacrifice for our nation," he said.

General Peter Cosgrove, who heads the NSW Centenary of Anzac Advisory Council, said he was encouraged to see so many young people at dawn services.

"Anzac Day is a national day, and I am really uplifted by the way younger Australians are inquisitive to know what it's all about," he said.

Ms Gillard will lead the annual Anzac Day dawn ceremony at Gallipoli before a crowd of thousands of Australians and New Zealanders.

The Prime Minister will deliver a speech that describes the Australian sacrifice at Gallipoli as "Australia's first act of nationhood in the eyes of a watching world".

And while the battle was ultimately lost, she will say that no shame, only pride, can exist for Australians at Gallipoli.

She will says that unlike their French and British comrades - who had won battles at Waterloo and Austerlitz during the Napoleonic wars - the Anzacs had no such honour to defend.

Coachloads of Australians and New Zealanders have filled the surrounding towns of Eceabat and Canakkale ahead of the service.

"It hits home when you visit a place that's not much bigger than a tennis court where Australians were pretty much slaughtered," he said.

"It's pretty hard to put it into words when you see the piece of ground."