Sydney Entertainment Centre may be demolished; Profit before people and history, by Greg Tingle 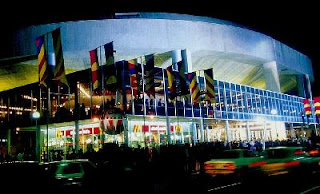 Let's get one thing clear from the get go... knocking down the historic Sydney Entertainment Centre to make way for a new development is not the same as knocking down or revamping its neighbour across the water - Star City Casino (which become the much nicer 'The Star').

Can you imagine the outrage in the United States if they were to announce a proposal to demolish New York's Madison Square Garden aka MSG.

I bet that is a survey of Sydney-siders, or even say Australians across the board were taken, that close to 100 percent of they would not want the Sydney Entertainment Centre demolished, due to its historical importance to the arts and entertainment industry down under.

"Sin City" Sydney media, especially the arts and entertainment niche, are expected to get all over this topic and the Media Man agency is not going to see this iconic hub of Aussie entertainment die without a hell of a fight.

I don't know about you but the NSW Premier Barry O'Farrell might meet with a tidal wave of opposition against its proposed destruction.

Some of the blub coming out of the NSW Government, no doubt with some cleaver spin added by the proposed developer, goes like this...

The Sydney Entertainment Centre will be demolished and the convention and exhibition centres at Darling Harbour closed for up to three years as the precinct undergoes a $1 billion makeover.

NSW Premier Barry O'Farrell today announced the development of an integrated exhibition and entertainment precinct in the city's CBD.

The fully integrated convention centre will increase the size of the existing precinct by two thirds to 20 hectares and will include the largest exhibition space in Australia at 40,000 square metres.

"The project will mean a complete face lift for Darling Harbour - as well as the world-class facilities," Mr O'Farrell said today.

Up to 3500 jobs are expected to be created during the construction (but what about the job losses at the Sydney Entertainment Centre)?

The 30-year-old Sydney Entertainment Centre is to be demolished while the exhibition and convention facilities will be closed from late 2013 to late 2016.

The project is aimed at boosting the competitiveness of the major events industry in the state, particularly in terms of the Asia-Pacific.

"They will bring NSW an economic benefit of more than $1 billion over five years," Mr O'Farrell said.

"NSW has already lost $150 million in economic benefit over the four years to 2010-11 because the current facilities have not been able to accommodate 169 conventions and 12 exhibitions," Mr O'Farrell said.

The new facilities will include the biggest meeting room space in Australia at 6000sq m and the biggest Australian convention hall capacity.

There will be a red-carpet premium entertainment facility with a capacity of at least 8000 people, suitable for international entertainment events and 'mega' conferences.

Infrastructure NSW (INSW) will lead the delivery of the new facilities as part of a Public Private Partnership (PPP) tailored for the project.

A Media Man agency entertainment commentar was overheard "Just how much money had been dangled in front of the NSW Government to get green light to demolish one of Australia's greatest landmarks. You have the Sydney Harbour Bridge, the Sydney Opera House, Crown Casino, Ayres Rock, and then you have the Entertainment Centre in Sydney. I think its likely that a good chuck of Australia's entertainment industry will be vocal in telling the NSW government to save the iconic entertainment venue. We think another proposal for development of Darling Harbour needs to be executed - one that does not include the destruction of the SEC."

Many folks in the Australian entertainment industry are already telling media that they are not "anti development" full stop - they are just against the part of the development proposal that includes the destruction of one Australia's greatest entertainment and arts landmarks.

Those opposing the development of the Sydney Entertainment Centre are encouraged to be vocal and contact media, their local MPs, Minster of the Arts, and another other Australian government department who will listen to reason.