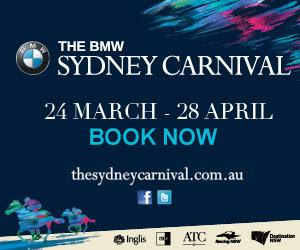 Pierro, trained by Gai Waterhouse, has won the $3.5 million Golden Slipper at Rosehill.

"(At the time) I shook my head and walked away. She's a genius."

Gai said Pierro would take out the Golden Slipper after the colt made a winning debut in the Breeders' Plate at Randwick Racecourse in October.

Rawiller had Pierro positioned behind the leader Snitzerland and the colt never went around a runner before claiming the world's richest race for two-year-olds.

"Today I ended up getting a perfect run," Rawiller said.

"I knew if he got a trouble-free run he would be hard to beat."

"He just wore the filly down ... it was really exciting," Waterhouse said.

Snitzerland gave everything in defeat after taking up the running as the field settled.

She was being hailed the winner until Pierro, a son of former champion racehorse and now leading sire Lonhro, emerged with his run.

Manighar has led home a trifecta for imported stayers with victory in the $2.25 million BMW.

"He might have been born and bred in France but he's a fully-fledged Aussie as far as I'm concerned."

Jockey Luke Nolen had Manighar racing outside the leader Fiumicino.

Nolen took the six-year-old to front as the field straightened and the result was never in doubt.

Americain gave his all after being forced to race three-wide for the entire trip.

The 2010 Melbourne Cup winner was under pressure at the 400m but rallied strongly in the final stretch.

Drunken Sailor, raced in the same interests as Manighar, took the minor placing.

Manighar and Drunken Sailor were trained by English conditioner Luca Cumani before finding their way into the stables of Moody and Mike Moroney respectively.

"It's been quite a feat," Nolen said of Manighar's run of form which has also included Group One wins in the Australian Cup and Ranvet Stakes.

"Pete's a marvellous trainer but I think we've been given a true indication of his abilities with what he has been able to do with this horse."

"The only place I wanted to go was along the fence. I could see everything opening up in front of me," Rodd said.

"All I could see was green lights everywhere I went."

In a race which changed complexion over the final 100 metres, Metal Bender's head bobbed at the right time to give trainer Chris Waller a Golden Slipper day Group One.

"Full credit has to go to Chris Waller," Rodd said.

"He always gets these horses to back up and run well and he did it again today."

Two-time Group One winner Secret Admirer finished third, just ahead of New Zealand star King Mufhasa, showing she is on target for the Doncaster Mile.

QUEEN OF THE TURF STAKES

Glamour mare More Joyous has continued her march towards the Doncaster Mile with an emphatic win in the $400,000 Queen Of The Turf Stakes.

Making it two wins in as many autumn starts, More Joyous made a one-act affair of the Group One race for fillies and mares.

She worked forward from a wide draw to sit outside the leader Red Tracer before jockey Nash Rawiller took a trail on King's Rose in the middle stages.

Rawiller was then able to bide his time until he presented More Joyous three-wide at the top of the straight.

The multiple Group One winner quickly had her rivals covered, establishing a lead at the 200m before drawing away.

"She's an absolute pleasure to ride."

Trainer Gai Waterhouse was typically upbeat about More Joyous's chances in the $2 million Doncaster Mile, run at the mare's home track of Randwick in two weeks.

"She is so well weighted she should win it," Waterhouse said.

More Joyous was a victim of a rain-affected track in last year's Doncaster when she finished 11th of 17 runners as favourite.

Other than Gai Waterhourse, Myer face Jennifer Hawkins showed and posed for a few photos, and performing artist Jessica Mauboy showed and performed for crowd patrons who were prepared to pay with an additional $70 or so for a fun day at the races. We suspect many would have put that kind of money on an extra bet or two on their favourite four legged friends.

The weather was beautiful and sunny. Main recommendation for future events is to provide lots more nearby car parking for hard working news media and members of the public.

A good day at the races, and with some fine tuning in making the event more public and news media friendly next year the event might almost become perfect. Racing NSW wants to bring back the masses to attend live racing, however they need to go the extra mile, as everyone is competing for the entertainment dollar, and lets face it - there's plenty more entertainment options in town - especially at the moment, and many more more affordable.