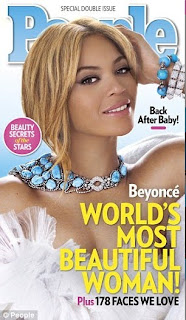 Grammy-winning performer and new mother Beyonce has been named the world's most beautiful woman by People magazine.

The 30-year-old topped the magazine's annual list just months after she and rapper husband Jay-Z welcomed their first child - a daughter named Blue Ivy Carter, who was born in New York in January.

"I feel more beautiful than I've ever felt because I've given birth," she said.

"I have never felt so connected, never felt like I had such a purpose on this earth."