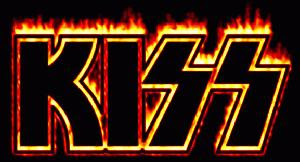 From Sydney, Australia to Hollywood, to Japan, and all across the globe, the globe knows that rock legend KISS are "The Greatest Band In The World".

You can't miss their hard rock riffs or their fantastic face paint.

Flashback: Late 1972 - Simmons spots an ad in Rolling Stone placed by Peter Criss, a drummer "looking to do anything to make it". Criss auditions and begins rehearsing with Simmons and Stanley as a trio.

Before man KISS concerts the following bold announcement is made... You Wanted the Best , YOU GOT THE BEST! The Hottest Band in the World — KISS!

As the Media Man agency entertainment commentator says "KISS may have called themselves the 'Greatest Band In The World', but for many music lovers its been true since 1973 when the band first formed under the KISS banner".

Paul Stanley and Tommy Thayer met with the UK's First Light Publishers last week to review new full-size proofs from the giant KISS book. The KISS MONSTER BOOK will be released this summer.

Gene Simmons is hosting a live interactive event next week from Buenos Aires, Argentina, that will give fans the chance to chat with him and the other stars participating in the Rock N Roll AllStars tour of South and Central America. The Q&A session will take place Monday, April 23, at 5 p.m. ET from Club Geba, where the hard rock collective will be performing that evening.

“I’m thrilled to be hosting a real-time conversation between fellow rock legends, die-hard fans and myself during this first-of-its-kind tour,” Simmons says in a statement. “This Live & Global session is going to be a great addition to the tour and venue, and I’m looking forward to giving our fans a ‘backstage pass’ to talk with us!”

The Rock N Roll AllStars trek kicks off Thursday in Asuncion, Paraguay, and is scheduled through a May 6 concert in Caracas, Venezuela.


KISS catch up news: News that you may have missed...

"We're sick and tired of girls getting up there with dancers and karaoke tapes in back of them," Gene Simmons says...

KISS and Motley Crue are hitting the road for a co-headlining tour -- dubbed simply "The Tour" -- this summer, the iconic rock acts announced on Tuesday.

The 40-date North American tour will kick off in Bristow, Va., on July 20 and run through the end of the summer, with the hard rock groups each playing 90-minute sets.

"These guys are the baddest band in the f***ing world," Motley Crue's Vince Neil said on stage with both bands at the Roosevelt Hotel on Tuesday. "Our very first tour was with [KISS], 1982. To be able to do it now is amazing."

"Seeing them on stage, it was obvious back then that this was the next big thing," KISS' Paul Stanley added. "We talk about bang for buck, this will be the definition of bang for buck on this tour. If you want to see more bombs and artillery, you'll have to check out the military."

Whether or not KISS bassist Gene Simmons' A&E reality show, "Gene Simmons Family Jewels," will follow the explosive tour was unclear. "Probably. Maybe… not," he said.

But he had a clear answer to for the pop stars now invading stadiums once filled largely by rock acts.

"We're sick and tired of girls getting up there with dancers and karaoke tapes in back of them," Simmons said. "No fake bullshit. Leave that to the Rihanna, Shmianna and anyone who ends their name with an 'A.'"

LAS VEGAS, Nev. – KISS® By Monster Mini Golf®, a unique rock ‘n roll-themed amusement attraction based around the legendary band KISS® is set to open on Thursday, March 15 with co- founding members Paul Stanley and Gene Simmons, as well as band members Tommy Thayer and Eric Singer in attendance. As part of the celebration, Paul Stanley and Gene Simmons will slash through the ceremonial ribbon with their guitars and walk the “Black Carpet” with other notable guests.

“Our challenge is to continue to find ways to weave KISS into the very fabric of Americana. We'll be there to celebrate the first ever KISS® By Monster Mini Golf® grand opening in Las Vegas. This is miniature golf KISS style and another part of our KISS world. We've big plans for this and in this case what happens in Vegas won't stay in Vegas ” said Paul Stanley.

Gene Simmons added, “This venue is perfect for Las Vegas. Where else can you go play a round of KISS® By Monster Mini Golf® and then renew your wedding vows in an official KISS “Hotter Than Hell” Wedding chapel, only in Vegas.”

KISS® By Monster Mini Golf® is the first-of-its-kind indoor glow-in-the-dark custom-designed, rockin’ 18-hole miniature golf course and will also host a state-of-the-art arcade, the largest KISS gift shop in the world, A KISS Gallery, the “Hotter Than Hell” Wedding Chapel, a private VIP Room, FANtastic KISS® themed event rooms and the “Rock ‘n Roll All Nite” Café. KISS® By Monster Mini Golf® is located at 4503 Paradise Rd. Las Vegas, NV 89169 in the Shoppes at Harmon Square across from the Hard Rock Hotel & Casino.

"The Kiss brand just keeps getting bigger and bigger around the world. KISS® By Monster Mini Golf® will be a favorite for the Kiss Army legion of loyal fans as well as new Kiss fans" said Dell Furano, CEO of Live Nation Merchandise, Kiss longtime worldwide exclusive licensing and merchandising partner.

About KISS
KISS, the legendary American rock band was founded in 1972. Four decades later KISS remains one of the most influential bands in the history of Rock and Roll. Achievements include the release of approximately 44 albums, sales of over 100 million albums, sold out concerts tours around the world and the incredible support of over 6 million FaceBook fans worldwide. KISS has performed at the Super Bowl, 2002 Winter Olympics, 2009 Finale of American Idol, 2005 Rockin' The Corps Concert. In 2009, KISS was nominated for induction into the Rock & Roll Hall of Fame. KISS is currently recording their 2012 Album "Monster".