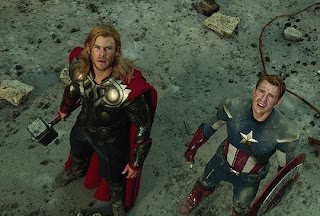 It's the hottest new action film to showcase Marvel Comics' heroes and it's burning up Australian screens right now, but if you think you already know everything there is to know about The Avengers, you're wrong.

Here's five facts from behind the scenes of The Avengers:

Tom Hiddleston, who plays the Norse god Loki, had to learn the most fight sequences of any cast member for his battles with The Avengers. He did training in Wushu, a Chinese martial art, as well as boxing, stick and staff work, knife work and hand-to-hand combat.

He wasn't the only one put through the wringer though.

Mark Ruffalo lost 21 pounds to play Hulk, while shooting had to be rescheduled when Jeremy Renner tore a muscle from his back to his shoulder filming stunts for Hawkeye.

IT AIN'T EASY BEING GREEN

Mark Ruffalo, who replaced Edward Norton as The Hulk, says it's not a role he would usually take on, but Robert Downey Jnr and the Iron Man movies were what convinced him.

He says unlike previous incarnations of The Hulk, he doesn't change size in The Avengers and is always "about eight and a half feet tall" regardless of how angry he is.

The Avengers is the first time, in film, TV and in the comics, that Bruce Banner and The Hulk have had physical similarities. Instead of just CGI, director Joss Whedon used motion capture technology (used to create characters like Gollum from Lord of the Rings) so you can see Ruffalo's facial characteristics in The Hulk.

The usually blonde Scarlett Johansson was not Iron Man 2 director Jon Favreau's first choice to play Natasha Romanoff, aka Black Widow, who in the comics is a tall Russian redhead. But when he met with her, she had dyed her hair red so he would know she was serious about the part.

The Avengers director Whedon made it clear from the beginning that a strong female character was absolutely essential and an all-male Avengers team was unacceptable.

The Avengers is the first time Samuel L Jackson's SHIELD agent Nick Fury has stepped into a main role, instead of just cameos. But during filming, his printer was hacked and the movie script for The Avengers leaked online. Marvel sent a team of investigators to Canada to track down the person that put it up for sale online.

Nick Fury's own spin-off movie is now in the works, with Jackson predicting fellow agent Black Widow (Johansson) will also be in it.

SPYING THE SPIES DURING THE SHOOT
Advertisement: Story continues below
The first day of the 92-day shoot was on April 24, 2011, and involved a scene where Nick Fury confronts Steve Rogers in an old boxing gym with a new mission.

It wasn't until day 11 that the entire lead cast of The Avengers assembled for the first time, for a scene where they find out why Nick has rounded them up.

Movies aren't generally shot chronologically, but the last scene of the movie was also shot on the last day of production, with the film wrapping on September 5, 2011.

It was shot in Central Park in New York with the entire lead cast, but because it was a long weekend in the US, thousands of onlookers gathered to see the Avengers in costume, including Thor and Loki decked out in their Asgardian gear. (AAP)