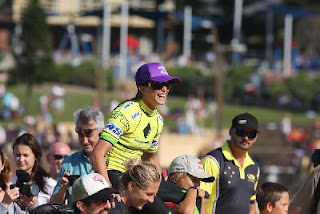 Conlogue who has won multiple ASP 6-Star events, today claimed her maiden win on the elite ASP Women’s World Championship Tour, a feat that sees her jump to 4th on the ratings. Conlogue and Manuel battled through the stacked field of competitors to reach the Final. The dying swell made conditions difficult, but Conlogue found the best waves that allowed her to execute multiple powerful turns.

“I’m speechless right now!” Conlogue said. “It’s been two years on the ASP Women’s World Championship Tour where I kept losing in the Quarterfinals. Then today after winning my Quarterfinal I just tried to go and win the thing. Malia (Manuel) was surfing great in the Final, even though the waves were tricky. I’m really stoked to have won this event! I love Steph (Gilmore) and Sally (Fitzgibbons) and to have them chair me up the beach was absolutely amazing!”

Manuel’s run to the Final wasn’t easy, defeating Gilmore and Tyler Wright (AUS), 18, in the morning’s Quarterfinal and Semifinal. Manuel’s smooth style and tail drifting turns saw her earn big scores and new fans all event. Her red-hot run was only ended by Conlogue’s superior wave selection. Manuel is now equal 6th on the ASP World Championship Tour, and she is now the highest ranked 2012 rookie.

“I’m really relieved to get a good result here at Dee Why,” Manuel said. “I’m happy to move up the ratings. It’s a great confidence boost going into the next three events. I’m really stoked to make a final in my rookie year. I hope the battle for ASP Rookie Of The Year goes down to the last contest. It’s really close between me and Lakey (Peterson). I’m not going to count her out.”

Rebecca Woods (AUS), 28, and Wright were the highest placed Australian surfers, both finishing equal 3rd place. Wright has placed 3rd three times this year, but this is Woods’ best result of the 2012 season and is sure to help her requalification campaign.

“It’s a bittersweet feeling at the moment,” Woods said. “I’ve had a few last places this year, so in some regards I was just happy to put it together for a few heats. I’ve made about nine Semifinals in my life and still never made it into that elusive Final. It’s good to be pushed by the younger girls. I woke up this morning and thought Courtney (Conlogue) was going to win today, then she was on my side of the draw and I cursed myself for putting that in my head. Then she beat me and won the contest, so I was right.”

Gilmore, four-time ASP Women’s World Champion, suffered a shock early exit at the Commonwealth Bank Beachley Classic today. Gilmore has had three final appearances in the first three events of the year, and today added a respectable equal 5th place finish to her tally. In testing conditions Gilmore was bested by an in-form Manuel, who also defeated her in their non-elimination Round 3 match-up yesterday.

“It’s disappointing,” Gilmore said. “But it’s not a terrible result for me. I feel really strong. When there’s great waves on offer I feel like I’m surfing great. It’s just a matter of getting those waves and I didn’t get them today. I’m looking forward to heading over to Brazil and finding the form I had in the first few events.”

Fitzgibbons went down in the Quarterfinals to eventual event winner Conlogue. Fitzgibbons held an early lead with two mid-range scores, but Conlogue snared the best wave of the heat and tore it apart with some impressive turns, netting a 9.00 (out of a possible 10) and won the heat.

“This is the worst part about what we do,” Fitzgibbons said. “Today I just wasn’t good enough. When you’re feeling strong, you really want to progress through to that Final. I got some early scores and it was really challenging out there. That one wave popped up for Courtney (Conlogue) and she grabbed a 9.00, which is the highest score of the day. I’m really happy for her. She’s a good friend and she trains and surfs really hard and that paid off today.”