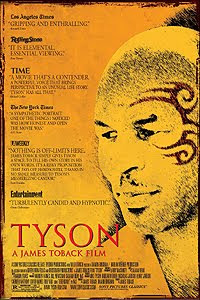 Mike Tyson, once the self-styled "baddest man on the planet," searched for words on Sunday, as a ring career marked by glory and infamy ended with his induction into the International Boxing Hall of Fame.

An overcast, rainy day couldn't keep thousands of fans away. Tyson was enshrined, along with actor Sylvester Stallone, who was honoured by the hall for his "Rocky" movies and Australia's Kostya Tszyu.

"I've got to be goofy about this or I'll get emotional up here," said Tyson, who paid tribute to late trainer Cus D'Amato, the man who guided his early career and became his legal guardian after Tyson's mother died.

Eye of the tiger ... fellow inductee Sylvester Stallone and Mike Tyson chat before the induction ceremony.

D'Amato died in 1985, the year before Tyson knocked out World Boxing Council champion Trevor Berbick in the second round to become, at 20, the youngest heavyweight world champion in history.

"All this stuff started when I met Cus, and Bobby Stewart (a social worker and boxing fan who introduced Tyson to D'Amato)," Tyson said.

"I was in reform school because I was always robbing people."

When Tyson paused, the crowd encouraged him. He went on, but finally was overcome by the emotion of the moment.

"Hey guys, I can't even finish this stuff. Thank you. Thank you," Tyson said, before sitting down.

It was another emotional chapter in Tyson's tale, a saga of punishing power, a meteoric rise and then an epic fall from grace.

Tyson finished his career with a record of 50-6 with 44 knockouts, personifying at times the best and worst of the sport.

"Iron Mike" gained iconic status after escaping the mean streets of Brooklyn under the wing of D'Amato.

His downfall began in 1990 in Tokyo, where the undisputed champion suffered the first loss of his career, a 10th-round knockout at the hands of James "Buster" Douglas in one of the biggest upsets in sport.

In 1992, Tyson was convicted of raping a beauty queen at a pageant in Indianapolis, Indiana. He served three years of a six-year sentence before his release in 1995, still denying the charges.

Tyson reclaimed the heavyweight throne, but lost to Evander Holyfield in 1996 and, in a 1997 rematch, infamously bit Holyfield's ears twice, serving a year's banishment in exile for the move.

Despite substance abuse and serving jail time, Tyson made one final run at boxing supremacy but, in his last world title fight, he was knocked out in the eighth round by Britain's Lennox Lewis in Memphis, Tennessee.

Tyson filed for bankruptcy in 2003 and retired after losses to Britain's Danny Williams in 2004 and American Kevin McBride the following year.

Tyson quit after six rounds in his final fight, finishing his last round sitting on the canvas.

Both were inducted in the International Boxing Hall of Fame on Sunday, Tyson for his reign as heavyweight champion of the world, Stallone for his "Rocky" movie series, and the fans turned out in droves on a rainy, overcast afternoon.

Thousands packed every corner of the induction grounds, and Tyson was no match for the emotion of the moment.

"I've got to be goofy about this or I'll get emotional up here," Tyson warned before trying to honor the late trainer Cus D'Amato, who became his legal guardian after Tyson's mother died and taught him the finer points of the sweet science in a gym in Catskill, N.Y., just a 2½-hour drive from the Hall of Fame.

D'Amato died in 1985, the year before the hard-punching Tyson knocked out WBC champion Trevor Berbick in the second round to become the youngest heavyweight champ in history at age 20.

"All this stuff started when I met Cus, and Bobby Stewart (a social worker and boxing fan who introduced Tyson to D'Amato)," Tyson said. "I was in reform school because I was always robbing people.

"All my life I watched these guys. I look at them different," Tyson said as he looked around at a dais that included hometown heroes Carmen Basilio and Billy Backus, Jake LaMotta, Leon Spinks, George Chuvalo, and Marvin Hagler, among others. "Why would I want to be like these guys I always say. I don't know.

Tyson paused briefly -- the crowd erupted in "Come on Mike!" -- and then he tried in vain to continue.

"Oh, man," Tyson said. "I have to take my time with this because there's other guys up here, you know. When I met Cus, we talked a little bit about money, but we wanted to be great fighters.

"Hey guys, I can't even finish this stuff. Thank you. Thank you," Tyson said, then sat down.

If anyone could understand the 44-year-old Tyson's mind-set, it was Stallone, who penned the script about an underdog boxer from Philadelphia named Rocky Balboa and then played the part in the movies. "Rocky" was released in 1976 and was nominated for 10 Academy Awards, winning best picture, best director and best film editing.

"Rocky" made Stallone what he is today and captured boxing's heart from the outset. Every induction weekend is punctuated by the theme song from "Rocky," and on this day it seemed a little bit louder than usual as it blared over the loudspeakers when the honorees made their way onstage.

"I've never pretended to be a boxer. I don't possess those skills," said Stallone, who skipped the annual pre-induction parade because of security concerns. "What I do think I have is an understanding of what goes on outside the ring. Outside the ring is sometimes maybe an even bigger struggle than what goes on inside the ring, and I was able to capture that. Then I believe that you can identify more with the fighter."

"More than that, you also realize that our life is a constant battle," Stallone said. "Sometimes I write things that may seem a little sentimental, but I truly believe it's not how hard you can hit -- it's how hard you can get hit and keep moving forward because that's really what makes the difference in your life."

Stallone also wrote five other movies based on the Rocky Balboa character and in 2006 was awarded the Boxing Writers Association of America award for "Lifetime Cinematic Achievement in Boxing."

"There is special reverence for me," Stallone said. "They are the greatest athletes in the world. They are our connection to the past and our way to the future. They are the guys that go in there and take the blows and show that if you really put it out there on the line, you are a champion. You may not be the champion of the world, but you'll be the champion of your life.

"And Yo Adrian, I did it!" Stallone shouted in closing, repeating one of the more famous lines from the movie.

Chavez, who grew up in an abandoned railroad car with his five sisters and four brothers, became a three-division champion, registering 88 knockouts before retiring with a professional record of 107-6-2.

"My induction into the Hall of Fame is not for me, it's for all of you and all of Mexico," Chavez said through an interpreter in a brief speech.