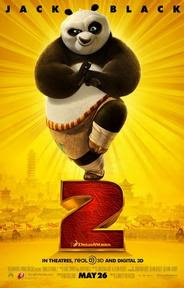 Hollywood mega stars Lucy Liu and Rose Byrne arrived at Sydney Airport earlier this morning in from from LA.

Byrne who stars in the soon to be released movie Bridesmaids was the first to touchdown about 6.30am. Liu left Sydney airport about 7.15am.

Liu will attend the red carpet premiere of Kung Fu Panda 2 tonight, in which she plays the character of Viper.

Her co-stars in the animated movie include Jack Black and Angelina Jolie.

Film marketing buffs will find this interesting... DreamWorks Animation has invested $100 million in creating promotional partners and building up marketing for its films. For Kung Fu Panda 2, DWA has partnerships with McDonald's, AT&T, Best Buy, General Mills (cereals), Sun-Maid (raisins), Airheads (candy), Hint Water and HP. The film's characters are used in products and advertising campaigns across various media. The studio is also pursuing social media efforts to promote the film. DWA partnered with House Foods America to brand its products, notably tofu, with advertising of the film. Variety reported that the partnership was the first-ever between a film studio and a tofu company. The studio also enlisted the parade balloon of Po from the Macy's Thanksgiving Day Parade to tour in six cities, concluding with Los Angeles over Memorial Day weekend in late May of 2011. Merchandise is also being produced for the film: Mattel (toys), THQ (video games), Hallmark Cards (cards), and Jem Sportswear (apparel). Publishers VTech, Penguin Books, Dalmatian Press, and Ape Entertainment are releasing books linked to the film.

Stay tuned to EvaRinaldi.com YouTube and Music News Australia for some fantastic coverage and photographs from the premiere.