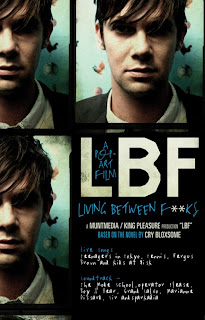 Alex Munt is the director, producer and screenwriter of this flick, and a very solid effort it is.

It's based on a novel by Cry Bluxsome with a raunchy cover 'Living Between Fucks'.

The story is about a writer named Goodchild who is played by Toby Schmitz, who comes back home for the funeral of his ex-girlfriend, who is called the Dead Girl, played by Gracie Otto. She's quite the femme fatale and just happens to work in advertising. Love, loss, desperation - relationship ups and downs, its all here.

The rumour mill says the film was done for around $25,000 which may make it the cheapest in the festival, but its not cheap and nasty, and is stimulating and mighty entertaining.

Our friends at the Sydney Film Festival has the following blurb on the flick...

Fresh from its world premiere at SXSW, Alex Munt's highly-stylised 'pop art film' is based on the novel Living Between Fucks by Cry Bloxsome, from which it draws much of its scathingly funny voice-over narration. Paris-based writer Goodchild (Toby Schmitz) returns to Sydney for the funeral of his ex-girlfriend The Dead Girl (Gracie Otto) and steadily goes off the rails. He becomes entangled with The Beautiful Financial Backer (Bianca Chiminello), who commissions him to write The Love Enterprise - a piece of corporate branding masquerading as Beat poetry. Charged with this new task and a heady cocktail of booze and drugs, Goodchild lurches between parties interviewing people he encounters along the way. Andrew Soo's cadent editing style is rhythmically complemented by local bands that appear live in the film - Teenagers in Tokyo, Tennis (now Tortoiseshell), Fergus Brown - and contribute prominently to the soundtrack, together with Kids at Risk, whose frontman Septimus Caton plays Cash in the film.