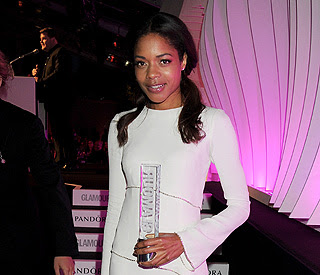 Naomie Harris has confirmed she is in the running to star opposite Daniel Craig in the next 007 film, insisting she "would love to" become the next Bond girl.

Rumours emerged last week linking the British actress to a part in the upcoming 23rd James Bond movie, which will see Craig step into the superspy role for a third time.

Harris has now opened up about the speculation, revealing she has been in talks with movie bosses, but has yet to sign a deal.

She tells Britain's Radio Times, "Nothing is confirmed, but I would love to be part of the Bond movies."

The Pirates of the Caribbean: Dead Man's Chest star also reveals her admiration for the latest 007 films, because they portray Bond girls as more than just sex symbols.

She adds, "What makes them (Bond movies) work is that they are responsive to the times. Eva Green's character in Casino Royale was not scantily clad. She was an intelligent, strong, modern woman. The older idea of the Bond movie is in the past. Now it appeals to all generations, ages and sexes..."

However, Harris is adamant that if she gets the part, she won't be taking her clothes off onscreen: "It's the objectification that I don't like. I didn't sign up to be a stripper... I'm very anti the pressure that is put on women to take their clothes off."

The currently untitled Bond 23, to be directed by Sam Mendes, is slated for release next year.