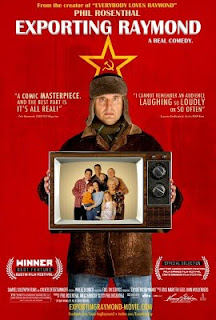 It was an overcast and wet Sydney day but the atmosphere inside was warm, inviting and jovial.

Exporting Raymond is just one of the 161 films showcased at the Sydney Film Fest, but I think its a safe bet it's the funniest one.

Festival publicist "Nicky" made us feel most welcome at the press call. The film's creator Philip Rosenthal was kind enough to offer us a video interview and photo opportunities before the start of the film and it was Philip who personally invited us to stay and enjoy, so how could we say no.

"Exporting Raymond" chronicles the bumpy road by which long-running and ultra successful U.S. sitcom "Everybody Loves Raymond" launched its Russian edition -- now a huge hit in its own right.

The documentary has provided director - creator Phil Rosenthal his own reality-sitcom vehicle and no doubt some additional revenue streams and the nature of the doco means that its likely to be warmly embraced in most of the western world. If you believe Phil and the storyline, other countries are in touch to do their own localised versions of 'Everybody Loves Raymond'.

Goldwyn plans to give the super funny doco a limited theatrical release, and the full Event Cinema in wet Sydney this afternoon would have given the powers that be extra confidence.

Rosenthal introduces us to his quarrelsome parents, the source of some of the "Raymond" family dynamics, before he and Sony executives jump a plane to Moscow to prepare a pilot show, knowing that other American shows like "Married … With Children" and "The Nanny" have already enjoyed success in Russian revamps.

Rosenthal hints to insiders and some film buffs that he was driven to drink at times by the uphill challenges thrown at the Mosco project - Russian Vodka to be exact. It's hard to know at times when your speaking to the creator if he's kidding or serious, and no doubt that can sometimes be an advantage.

Finding the perfect local Ray Romano equivalent was a tough one, and just when they think they have their man, the hiring is blocked by the prestigious Moscow Art Theater, for whom the actor is a valuable ensemble member. Then there's an imperious costume designer who insists on glamming up a show whose original appeal was strictly casual-wear; executives' flat refusal to shoot in front of live audiences; and a forced six-month hiatus before the project can proceed further.

There's a bit of a retro Cold War feel to the doco which a scene even takes us though a war museum, with a German swastika extremely visible one fallen plane. It of course further emphasises the clash of cultures.

Humour, as are smiles and currency are part of the universal language, but as we discover funny in American is not always funny in Russia, so the Russian's decide to throw in a sexy dressed nurse every now and again for effect and guaranteed audience reaction.

Rosenthal is generally seen as quite the serial pest, and its only near the end where some of his ideas really start to be embraced by the Russians.

His connecting with a few non-showbiz Russians...his ex-military chauffeur, a family that invites him to dinner are funny (and perhaps somewhat pre planned). Hey, they have to give it some meat for the storyline. The Skype conversation between the Russian family and his parents cleverly demonstrate how closely the oldie New Yorkers resemble the sitcom combatants they inspired.

Exporting Raymond is a quality production, very funny and quite original. There's numerous situations that have to be seen to be believed. The flick has been an audience award winner at multiple film festivals across the world, and Sydney gave it a big hug earlier today. Even in the unlikely event that you've never seen "Everybody Loves Raymond", you'll still enjoy this hugely entertaining film. Phillip mate, the good news is that Sydney loves you're Exporting Raymond, and we're confident you will continue to enjoy significant worldwide success. Say hi to Stanislav Duzhnikov and his comrades from us.