Terminator 3 actor Nick Stahl reported missing; May be linked to drug use 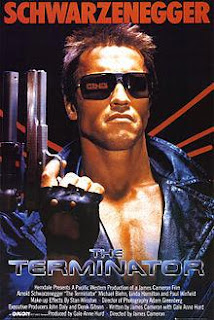 Terminator 3 actor Nick Stahl reported missing may be linked to drug use; Arnold Schwarzenegger says he'd be back for new Terminator movie...

Think of The Terminator, and you immediately think of Arnie classic cult film franchise, then there's The Terminator games and other spin offs, but today unfortunately the Media Man agency has some serious news to report...no hospital bed publicity shots with Expendables mate Sylvester Stallone today fans.

Los Angeles authorities were searching today for Terminator 3 actor Nick Stahl, whose disappearance his wife fears is linked to possible drug use.

Stahl's wife, Rose, filed a missing person's report with the Los Angeles Police Department on Tuesday, saying she last saw the 32-year-old actor on May 9, according to popular entertainment and celebrity news website TMZ.

Sources said his wife fears his disappearance could be connected to drugs, as he has reportedly been hanging out in the rough Los Angeles wholesale district, Skid Row, of late.

Stahl appeared in the 2003 film Terminator 3: Rise of the Machines, in the role of John Connor.

English actor Christian Bale took over the role of Connor for the fourth film in the series, Terminator Salvation, in 2009.


Arnold Schwarzenegger says he'd be back for new Terminator movie...

The former governor of California - who did not star in 2009's Terminator Salvation - made the comments when asked if he would reprise his most famous role as the killer cyborg.

He's currently working on a Twins sequel with Eddie Murphy set to play his and Danny DeVito's other long lost brother.

The Terminator is a 1984 American science fiction action film directed by James Cameron, co-written by Cameron and William Wisher Jr. and starring Arnold Schwarzenegger, Michael Biehn, and Linda Hamilton. The film was produced by Hemdale Film Corporation and distributed by Orion Pictures, and filmed in Los Angeles. Schwarzenegger plays the Terminator, a cyborg assassin sent back in time from the year 2029 to 1984 to kill Sarah Connor, played by Hamilton. Biehn plays Kyle Reese, a soldier from the future sent back in time to protect Sarah.

Though not expected to be either a commercial or critical success, The Terminator topped the American box office for two weeks and helped launch the film career of James Cameron and consolidate that of Arnold Schwarzenegger. Three sequels have been produced: Terminator 2: Judgment Day (1991), Terminator 3: Rise of the Machines (2003), and Terminator Salvation (2009). In 2008, The Terminator was selected by the Library of Congress for preservation in the United States National Film Registry, being deemed "culturally, historically, or aesthetically significant". (Wikipedia)

Terminator 2: Judgment Day is a 1991 science fiction action film, the second installment of the Terminator franchise and the sequel to The Terminator (1984). Directed by James Cameron and written by Cameron and William Wisher, Jr., it stars Arnold Schwarzenegger, Linda Hamilton, Robert Patrick, and Edward Furlong. Terminator 2 follows Sarah Connor (Hamilton) and her son John (Furlong) as they are pursued by a new, more advanced Terminator, the liquid metal, shapeshifting T-1000 (Patrick), sent back in time to kill John to stop him from becoming leader of the human Resistance. An older, less advanced Terminator (Schwarzenegger) is also sent back in time to protect John. After a troubled pre-production characterized by legal disputes, Mario Kassar of Carolco Pictures emerged with the franchise's property rights in early 1990. This paved the way for the completion of the screenplay by the Cameron-led production team, and the subsequent accelerated 186-day filming schedule starting in October 1990. The production of Terminator 2 required an unprecedented budget of more than $94 million (1991 dollars), much of which was spent on filming and special effects. The film was released on July 3, 1991, in time for the U.S. Fourth of July weekend. Terminator 2 was a significant box office and critical success. It had an impact on popular culture, and is considered hugely influential in the genres of action and science fiction. The film's visual effects included many breakthroughs in computer-generated imagery, marking the first use of natural human motion for a computer-generated character and the first partially computer-generated main character.[6] It received many accolades, including four Academy Awards for makeup, sound mixing, sound editing, and visual effects. (Wikipedia)


Terminator 3: Rise of the Machines...

Terminator 3: Rise of the Machines (commonly abbreviated as T3) is a 2003 science fiction action film directed by Jonathan Mostow and starring Arnold Schwarzenegger, Nick Stahl, Claire Danes and Kristanna Loken. It is the second sequel to The Terminator (1984). After Skynet fails to kill Sarah Connor before her son is born and to kill John himself as a child, it sends back another Terminator, the T-X, in an attempt to wipe out as many Resistance officers as possible, since Connor himself cannot be traced. This includes John's future wife, but not John himself as his whereabouts are unknown to Skynet. John's life is placed in danger when the T-X accidentally finds him.

Terminator Salvation is a 2009 American science fiction action film directed by McG and starring Christian Bale and Sam Worthington. It is the fourth installment in the Terminator film series. In a departure from the previous installments, which were set between 1984 and 2004 and used time travel as a key plot element, Salvation is set in 2018 and focuses on the war between Skynet and humanity, with the human Resistance fighting against Skynet's killing machines. Bale portrays John Connor, a Resistance fighter and the franchise's central character, while Worthington portrays cyborg Marcus Wright. Terminator Salvation also features Anton Yelchin as a young Kyle Reese, a character first introduced in The Terminator, and depicts the origin of the T-800 Model 101 Terminator. After a troubled pre-production, with The Halcyon Company acquiring the rights for the franchise from Andrew G. Vajna and Mario Kassar and several writers working on the screenplay, filming began in May 2008 in New Mexico and ran for 77 days. Terminator Salvation was released on May 21, 2009 in the United States and Canada, followed by early June releases in the United Kingdom, Australia, New Zealand, and South Africa. Warner Bros. handled the North America release and Columbia Pictures the international one. The film grossed over $371 million worldwide. Review aggregator Rotten Tomatoes reports that 87 out of 265 critics, 33%, have given the film a positive review, with a rating average of 5 out of 10. Metacritic, which assigns a weighted average score out of 0–100 from film critics, has a rating score of 52 based on 35 selected reviews. (Wikipedia)

Terminator and Arnie movie fans may be interested to play The Terminator online game that was developed by bwin.party digital entertainment - PartyCasino, and is currently featured across the Man Man online network.