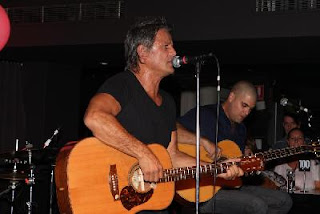 We were pleased that he played the classic 'Reach out and touch somebody' early into the night of entertainment.

The support act was talented singer - songwriter Bonnie Anderson who did a good job of warning up the crowd.

Thank you to everyone involved in making tonight a success.

Most recognised for his work as the lead singer of Australian band Noiseworks, who had 4 Australian Top 10 albums, Jon also fronted Australian rock band INXS after the death of its lead singer Michael Hutchence and was part of two Australian productions of Jesus Christ Superstar, playing Judas on both occasions, to high acclaim.

Jon Stevens has led a varied and remarkable career, standing strong through the successes and trials that have earned him a place as a respected performer. Through his solid studio recordings and incredible live performances, Jon has proven himself to be an adaptable, hard-working and inspiring artist. He has walked the boards of the world’s most prestigious stages and enjoyed the opportunity to work alongside the world’s best.

Bonnie Anderson is a natural-born performer. Having grown up surrounded by musical family and friends, including her mother who is also a singer, Bonnie’s childhood paved the way for her talents as she spent family time playing music and singing. When she wasn’t surrounded by bands and musicians, Bonnie also took inspiration from her Godfather, world champion boxer Lionel Rose.

In 2007, Australian audiences fell in love with Bonnie’s incredible talent as the then 12 year-old won first place in Australia’s Got Talent. Rather than get swept up in the media bandwagon and subsequent offers of recording and management contracts, Bonnie made the decision to put her future career on hold and ‘just be a kid for a while’.

Bonnie is an incredibly focused performer with professionalism beyond her years, so in pursuit of her ultimate dream to be taken seriously as a singer-songwriter and professional musician, she has chosen to forego an easy fifteen minutes of fame in favour of focusing on the “big picture”.

Like any artist, she has learnt her craft by watching the ‘old masters’ at work and has already shared the stage with some of Australia’s greatest acts including Jimmy Barnes, Diesel, Vanessa Amorosi, Kate Ceberano and Kasey Chambers. In addition to her vocal training, Bonnie also plays both piano and guitar. 2009 was a turning point for Bonnie and saw her tour with Australian icon, Jimmy Barnes, as a backing vocalist.

Now aged seventeen, the story is only beginning...

Anyone familiar with Chris and Nick won’t be surprised that Blue Beat stands for quality music played by superb musicians, in a setting that gives audiences and musicians alike a memorably satisfying experience.

Blue Beat is founded on the same passion for live music that’s been at the heart of Chris and Nick’s previous venues. For those who don’t know, Nick’s history includes entertainment, promotions and venue consultancy, including key Sydney venues Bar Broadway and the Marquee nightclub. Chris is synonymous with The Basement, as manager, co-owner and booker. After nearly four decades he has strong connections with industry from festival directors to sound technicians, and he brings all this to Blue Beat.

“We think Sydney needs, and deserves, a venue that’s of its time, and caters for reasonably discerning audiences, in a way that puts the music centre-stage”, explains Rice. “But you might also just want to call in for a late-night drink or an after-theatre tapas and a place to talk.”

“So the Blue Beat philosophy is about an exciting journey through the world of contemporary music, around which we’ve built a venue that’s unpretentious but has great attention to detail”, says Richards.