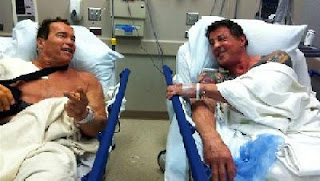 Arnold Schwarzenegger may be getting older, but he's still in demand by Hollywood movie studios, and still a big draw with movie fans.

After retiring from politics last year, he has cautiously eased his way back to acting.

The prospect of a multimillion-dollar divorce settlement with ex-wife Maria Shriver may have helped made up his mind, and Arnie has since committed to appearing in many action flicks.

Early next year he'll play an ageing sheriff who takes on a drug cartel in Last Stand, and he's also agreed to appear alongside long time mate Danny DeVito and Eddie Murphy in a sequel to the 1980s comedy Twins.

In the meantime he will tag team with close mate Sly Stallone to portray a mercenary in The Expendables 2.

Sly and Arnie are the most celebrated of the bodybuilding action heroes, and they both played a huge part of putting the action genre on the map.

There is however a new breed of bulked up, talented actors, headed up by The Avengers team, with Australian mega star Chris Hemsworth playing the beefed up Thor.

He added 20lbs of muscle to his six-foot-three frame for the role, through weights and constant eating. English actor Tom Hardy has put on over 30lbs for his role as Batman's nemesis Bane in the much-anticipated Dark Knight Rises, and looks huge.

Then again so does Christian Bale's Batman, and Bale famously put on 100lbs in six months in order to star in Batman Begins.

It took an Austrian bodybuilder and an extra from Hell's Kitchen to rescue the muscleman from B-movie obscurity.

The art of bodybuilding stemmed from the British military during the 19th Century. The craze caught on in the US in the 1940s, mainly due in part to a switched on Italian immigrant called Angelo Siciliano, who renamed himself Charles Atlas and launched a bodybuilding programme that promised to turn "97lb weaklings" into "heroes of the beach".

Bodybuilders began showing up in Hollywood films in the 1950s. Steve Reeves played Hercules in a series of historical action dramas, and so did Leeds-born weightlifter Reg Park.

But movies like Hercules and the Captive Women were hacked together B-pictures that no one took seriously.

Things began to evolve in the late 1970s, when a new breed of super bodybuilders burst on to the scene. Arnold Schwarzenegger and Lou Ferrigno were deadly rivals in the Mr Universe contest, and both had acting ambitions and the will to success in Hollywood.

Ferrigno got his break first, starring in popular TV series, The Hulk. But Schwarzenegger became a much bigger star thanks to hit movies like Conan the Barbarian and Terminator.

The young Arnie had average English and ordinary acting ability, but turned his faults to his advantage by deliberately targeting roles that were light on dialogue and heavy on action.

He hit the jackpot with Terminator, James Cameron's groundbreaking 1984 sci-fi thriller, but used it as a template for future roles. He said little, flexed his well oiled muscles and killed indiscriminately with a stony face.

Arnie also cracked jokes, using deadpan comic timing that surprised many critics and got over well with fans.

In planning his movie career, Schwarzenegger must surely have been inspired by the example of Sylvester Stallone. Born in Hell's Kitchen, New York, and raised in Washington DC, Stallone took to bodybuilding as a teenager but found it hard to break into acting.

He appeared as a thuggish extra in films like Woody Allen's Bananas and Klute. For a while it seemed he was doomed to a life of obscurity until he came up with an idea for a boxing flick.

The story is that Stallone wrote the script of Rocky in three days in the spring of 1975, and when Hollywood picked up on the idea he insisted on playing Rocky Balboa himself. The film was a huge hit, and acted as a catalyst for Stallone to become one of Hollywood's more unlikely A-listers.

The rise of Stallone and Schwarzenegger fitted in well with the new conservatism of Reagan-era America. In the 1970s, Hollywood had reacted to the moral confusion of the Nixon presidency with weighty anti-war films and edgy conspiracy thrillers.

But Ronald Reagan led a return to uncomplicated patriotism and a deep distrust of Johnny foreigner. In a way Sly and Arnie were the John Waynes of their time, and were quick to exploit the new enthusiasm for American flag-waving.

In the Rambo flicks, Sly Stallone provided a bloody rebuttal to the 1970s anti-Vietnam War activists. And though not American himself, Schwarzenegger made sure to kick the butts of commies and Islamic extremists in films like Commando and True Lies. Their movies were generally formulaic but highly effective, especially at the box office, and soon a host of buffed up imitators of sorts emerged.

Dolph Lundgren, Chuck Norris and Jean-Claude Van Damme all became action stars in the 1980s, churning out ever-more violent B-pictures in which the hulked hero took on impossible odds to defeat America's enemies.

But by the late-1980s, the hulky format was getting a bit tired and has out-welcomed its stay.

Mel Gibson and Bruce Willis, neither of whom were bodybuilders, paved the way for a new, quicker and slicker kind of action flick, and in the mid-1990s both Schwarzenegger's and Stallone's careers began to slide.

Arnie entered politics, and Sly limped off to lick his wounds and plot the inevitable comeback.

Come back he did, and his 2010 film The Expendables was warmly welcomed.

Sly and Arnie would have had their work cut out trying to keep up with the likes of Jason Bourne, and these days speed, not bulk, tends to be a key requirement for survival in the business.

If Schwarzenegger and Stallone have left a legacy, it's this: nowadays all the male stars hit the gym before they start shooting anything. Hollywood loves actors who can act, look great and buffed, and have the 'It Factor' - heard of Dwayne 'The Rock' Johnson? We thought so, and he's well on the way to becoming the biggest Hollywood movie money making actor of all time, and in an act of loyality continues to compete a few times a year for professional wrestling aka "sports entertainment" powerhouse, WWE, which also helps keep his fan base cultivated, and his face all over mainstream television. What may be in the future for 'The Rock'? Politics of course. The next Regan? Don't laugh - stranger things have happened. Jesse For Prez may not have happened, but maybe 'The Body' Ventura was just warning up the landscape for Rocky.

Be on the lookout for Marvel Entertainment - Marvel Studios to build upon the massive success of The Avengers with a remake or continuation of The Incredible Hulk movie. Don't expect Sly or Arnie to be cast, but there's always a decent chance Lou Ferrigno may turn up - especially in a cameo, following the lead of Marvel Comics icon, Stan Lee.

PRINCIPAL PHOTOGRAPHY UNDERWAY ON THE TOMB

Written by Miles Chapman for the screen, with a rewrite by Jason Keller, The Tomb follows Ray Breslin (Stallone), the world’s foremost authority on structural security. He’s analyzed nearly every high security prison. After being framed by persons unknown, all of Breslin’s ingenuity and expertise are about to be put to work in the most challenging test he’s ever faced: escaping from a high-tech prison facility that’s design is based on his own protocols.

Arnold Schwarzenegger plays Emil Rottmayer,a complex inmate with multiple shades of gray. He’s the guy who fights to keep the prisoners from losing their humanity in their darkest hour as they struggle together to stay alive.

Jim Caviezel plays Hobbes, the warden of the Tomb. This is the type of prison facility that deals with inmates that no government wants on its books. The lead guard of the maximum-security facility, Drake, is played by English actor and retired footballer Vinnie Jones.

Curtis “50 Cent” Jackson plays Hush, Ray Breslin’s right-hand man and high-technology expert. Buttoned-down with street lurking just below the surface, Hush is aptly named because when he speaks, it is just above a whisper…but it’s a whisper with attitude and edge that can turn from soft to drop dead serious in the blink of an eye. Vincent D’Onofrio plays Lester Clark, Breslin’s business partner and CEO of B&C Security, their independent security company hired by the Federal Bureau of Prisons to test the integrity of their maximum-security facilities nationwide. Amy Ryan plays Abigail Ross, jack-of-all trades and one of Beslin’s closest confidants at B&C Security. Sam Neil is cast as Dr. Emil Kaikev, the prison doctor embedded within the Tomb, who is sympathetic to Breslin’s plight.

Håfström’s previous writing/directing credits in his native Sweden include: the gripping coming of age drama Evil, which was nominated for an Academy Award® in 2004 for Best Foreign Language film; the thriller Drowning Ghost; and the drama Days Like This, which won Sweden’s Guldbagge Award for Best Screenplay. His films have been invited to festivals around the world and, at home, Håfström has received multiple Guldbagge nominations, with Evil winning the Award for Best Direction and Best Screenplay.

The behind-the scenes filmmaking team of The Tombincludes director of photography Brendan Galvin (Immortals, Behind Enemy Lines, Flight of the Phoenix), production designer Barry Chusid (Source Code, 2012, Aliens in the Attic, The Day After Tomorrow) and costume designer Lizz Wolf (The Expendables and The Expendables 2, Rambo, Dreamgirls, Suspect Zero, Pirates of the Caribbean: The Curse of The Black Pearl, Armageddon, Traffic).

The executive producers of The Tomb are Nicolas Stern, Bill Chase, Stefan Partirosyan.

Schwarzenegger and Stallone will next be seen on screen together in The Expendables 2, which is currently in post-production and will be released this summer by Lionsgate. Schwarzenegger recently wrapped filming The Last Stand, also for Lionsgate, produced by Lorenzo di Bonaventura and directed by Jee-woon Kim.