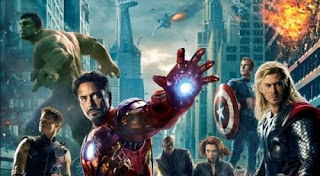 Marvel superhero fans in Australia and around the world. We've got tons of news for you today. There's Avengers news, quotes, numbers and more...

The Avengers proved that five superheroes are better than one by bursting into Hollywood's record books with a massive $197 million in ticket sales over its opening weekend in US and Canadian theatres, kicking off Hollywood's summer movie season with a bang.

The film now easily holds the record for greatest box office takings on its first weekend of cinema release, speeding past last summer's Harry Potter and the Deathly Hollows - Part 2, which opened with $166 million, and Batman franchise film The Dark Knight, according to Box Office Mojo.

In March, The Hunger Games opened with $150 million, the fourth largest opening in box office history.

The Avengers, which reunites Marvel comic heroes Thor, Iron Man, Captain America, the Hulk and Black Widow, has collected $630 million since it opened in international markets on April 25.

"We keep thinking we have a sense of what this movie can do, or will do, and every time we get a report it does even better," said Dave Hollis, Disney's executive vice-president of distribution.

"This is very satisfying, to say the least."

Disney's aggressive marketing, which included promotions aimed at women that included sending stars to The View daytime talk show, resulted in women making up 40 per cent of the audience for the action film, according to Disney's survey. Half the audience was also over 25 years of age, the studio said.

Winner of the past two weekends, Sony's romantic comedy Think Like a Man, slipped to second place with $7.8 million at North American theatres, according to Hollywood.com.

Hunger Games, from Lions Gate Entertainment, took the No 3 spot in its seventh week in theatres, with $5.6 million, and has collected $374 million in US and Canadian theatres during its run.

Warner Brothers' The Lucky One landed in fourth place with $5.4 million, and the animated film The Pirates! Band of Misfits from Sony finished in fifth place with $5.3 million.

The undisputed success of Avengers brought Disney the type of redemption that Hollywood loves to put on screen. In March, Disney released the expensive sci-fi adventure film John Carter, one of the biggest flops in box office history. The company said it expects to lose up to $196 million on that film.

Avengers is the first Marvel film released by Disney since the media and theme park giant purchased Marvel Entertainment in 2009 for $3.9 billion, a move to expand its appeal to boys with a stable of superheroes.

Disney would not say whether it plans to make a sequel. Sequels to films based on the Thor and Iron Man characters are scheduled for next year and Captain America in 2014.

About 52 per cent of The Avengers ticket sales came from higher-priced 3D tickets, Disney said.

The first weekend in May kicks off Hollywood's summer movie-going season, a four-month period typically filled with big-budget action movies and sequels. Coming movies include Batman movie The Dark Knight Rises, The Amazing Spider-Man, Men in Black 3, and Battleship. (Reuters)

Scarlett Johansson first enrolled in the Marvel comic book superhero universe when she was introduced as the mysterious Black Widow opposite Robert Downey Jr. in the 2010 blockbuster Iron Man 2.

The action-filled movie role marked a massive change of direction for the actress, who's known more for low-key performances in films like Sofia Coppola's drama Lost in Translation or Woody Allen's sly comedy Vicky Cristina Barcelona.

But Johansson is in fighting form to reprise her role as S.H.I.E.L.D. agent Natasha Romanoff, aka Black Widow, in Marvel Studios' The Avengers. With her bright red hair and sexy latex suit, the Black Widow teams up with Iron Man, The Hulk, Captain America, Hawkeye and Thor to stop the evil Loki from conquering Earth with his army.

Johansson sat down with media to talk about the film, the fighting style she learned for her role and what it was like to master her character's native Russian language.

Black Widow was introduced in Iron Man 2 but gets far more exposure in The Avengers. How did you expand the character?

At the end of Iron Man 2, we know she's a part of S.H.I.E.L.D., but we don't know what S.H.I.E.L.D. is. In this film, (director) Joss Whedon and I talked about her past. Who is she? How does she get to be a mercenary? What path do you follow in order to get to that place? We both wanted to see the darker side of her - not just that she's someone who is highly skilled, but why did she have to learn those skills?

You're in top form physically on screen. What new fighting skills did you learn?

We incorporated this Wushu style (of fighting) when the Widow wields a huge alien gun. That was new and really challenging. I had to learn how to spin it and move it. It was hard because I'd hit myself with it all the time. And it's heavy.

You learn (by using) a broom handle so you're like, 'Ah, I got it down, I've mastered it.' Then all of a sudden they're like, 'Here's the prop' and you're like, 'What? This thing is 20 pounds!' I was so terribly battered. I'd wake up every day in agony but it was a continuous thing, so it became normal (laughs).

Black Widow also speaks in her native Russian language, which you seemed to nail. Was it difficult to learn?

I had two days, so I had to learn it phonetically. I knew what I was saying but I had to be able to pronounce it and breathe some life into the lines so that it didn't sound like I was repeating some Berlitz tape.

We hired this great Russian translator, and she worked with the dialogue coach. She was really expressive, which helped, so my mouth found the words in a way that didn't just sound like I was a parrot.

You often play with hair color in your movie roles. Did you enjoy being a redhead for the duration of the shoot?

It's nice because it allows me to go a bit under the radar - people don't expect me to have that color of hair. I'm always happy when I do it because it's the first step of the process of finding the character again.

To me more than anything, the hair color represents a huge piece of work that we dive head first into. And I'm really happy when I can wash it out because then I'm like, 'Yes, It's finished, we actually did it!' Out it goes and you know you've accomplished something.

You're the only female Avenger in the cast. Did your male co-stars treat you any differently because of that?

If anything, the guys weren't as delicate with me as I thought they would be. They like to play hard and always dragged me along for the ride. I'd always come back with battle wounds. But they're a great group of guys. All of us got on so well.

Who did you spend most of your time with on location in New Mexico?

Jeremy (Renner, Hawkeye) because (we share scenes) together a lot. We fight together, so we had to do a lot of our stunt training together. We had the same battle wounds! Tom (Hiddleston, Loki), Jeremy and I spent a lot of time in the stunt gym because we fight so much hand to hand, so we ended up hanging out together. But we all equally had a closeness.

What was the dynamic like with all of you?

We're just lucky that there was no diva on set. It was everybody trying to support one another. It was really nice to have that.

The Avengers is screening now (to packed and very enthusiastic audiences).


Disney's "The Avengers" a winner for Paramount Pictures also: source...

Walt Disney's blockbuster "The Avengers" has five superheroes and record ticket sales. It also has a silent partner in Viacom's Paramount Pictures, which is in line to to get a massive payday even though the studio didn't spend a cent to produce or market the film.

Paramount Pictures already snatched $57.5 million in April, when the film was released internationally. And it stands to collect 8 percent of the millions that the film will earn in theaters, on DVD, and when it is watched on the Internet, according to two people with knowledge of the business deal.

Disney and Paramount agreed in 2010 to amend that agreement, giving Disney the rights to distribute Marvel-produced "The Avengers" and "Iron Man 3," the second sequel to the 2008 film that Paramount distributes. That agreement stipulated that Disney would pay Paramount a $115 million advance against future fees that Paramount would have earned.

Half of that fee was paid when Disney released "The Avengers" in international markets.

Spokesmen for Disney and Paramount declined to comment on the matter.

Paramount does not have rights to merchandise from the Marvel movies, and Iger told investors after the deal closed that he signed the getting the movie rights allows he to rev up Disney's marketing machine.

"Not only will we distribute it and market it, but we know that Marvel is working really hard with the cooperation of a number of entities at Disney to turn The Avengers into a true franchise," he said on the earnings call.

Studios and theater owners generally split ticket sales 50-50, meaning that Disney has collected $320.9 million based on "The Avengers" $641.8 million in worldwide ticket sales. Paramount's $25.7 million take would be applied against the pre-paid fee from Disney.

The two parties also agreed that "The Avengers" would appear on the Epix online and premium TV service that Paramount owns with Lions Gate Entertainment and the famous MGM studio. That's a big boost for the nearly three-year-old channel. Disney is legally obligated to show most of its movies on the Starz pay channel.

What size Paramount's take will be depends on how big a hit "The Avengers" becomes. The deal gets even sweeter for Paramount Pictures in 2013, when Disney is scheduled to release the third Iron Man. Paramount will get 9 percent of the money that film will generate.

It's going to be tough to match the hulking numbers of 'The Avengers', but the studios and business partners in on the action should be looking at plenty more green stuff generated from the ultra successful and cool Marvel franchise. Movies, games, fashion...what's next? Stay tuned true believers.