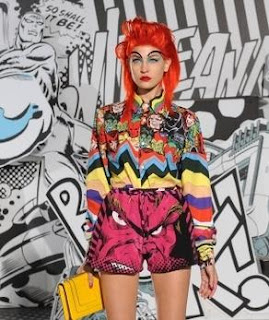 Yesterday it was media and insiders day, but it was today when MBFWA once again got to show itself off to the world.

In a world where life can imitate art, and fashion can take on all sorts of different forms, Marvel Comics - Marvel Entertainment superheroes got a whole lot of flash...adding to the strong buzz that Marvel's 'The Avengers' is already enjoying at the Australian and international box office.

Day one at the Mercedes-Benz Fashion Week Australia was a colour fans and colour buyers dream come true, start with three very different, but equally bright, collections to open our most famous and favourite fashion fest.

In recent years, Romance Was Born shows have been staged late in the evening with elaborate, stagey productions where the theatricality of the show may have been accused of overriding the actual garmets on display.

This time is was done very right. Romance Was Born opened Fashion Week in Sydney with a comparatively simple set inspired by the graphic Pop style of Marvel comics, cartoon superheroines and "Op Art".

Fashion models strutted up a lightning bolt-shaped catwalk showing off bright red wigs that brought us back to Ziggy Stardust - David Bowie images and memories. The makeup was what Fairfax Media and others have called "Kabuki-like", with big fake eyebrows, slashes of electric-blue eyeshadow and glossy red lips all the rage. Some media and buyers would have also thought of the KISS rock gods.

The clothes were also cartoon inspired. Marvel icon Stan Lee could not have dreamt his cartoons would once day be shown off on the world's most beautiful models. How about the Big Bridget Riley-style op art graphics on dresses and separates opened the show, before things got even crazier.

Romance Was Born is not for the conservative fashionista, but these days just about anything goes anyway. They put out clothing for parties and other events where wow factor and "look at me" rules. Multi-coloured digital print catsuits, sexy sequinned corseted, padded bomber jacket - interested... then this way out designer is for you ladies, or should that be 'Wonder Women'.

Queensland-based designer Gail Sorronda got a little more experimental this year. Ms Sorronda who enjoyed a strong response to showing her collection in Milan, Italy with the support of Dolce & Gabbana, has gone more for the type of bold colour and quirky print normally associated with designers such as Romance Was Born, moving away quite a bit from her traditional blacks and whites.

The title of her collection, Oh My Goth!, may have tricked a few fashion fans. Models stood motionless on spot-lit white plinths while groovy and scary music played. The models also showed off Pierrot-like black lips and pasty white faces, but this was contrasted with bright polka-dot blouses, patterned flares, tiered buttercup yellow dresses and headwear that reminded some media or Smarties - the confectionery brand.

Some media were not so happy about the darkness of the room, but it was done for the show - not the media. It showed them off wonderfully.

Gary Bigeni has a very quirky individual style – he wears riotous clashes of print and colour and currently sports bright blue hair – but the clothes he designs are clean, minimal and totally wearable.

He showed a refined collection of colour-blocked dresses, leather skirts and dresses, open-weave knitwear and prints that are well suited for a summer down under.

Rather than mashing up several bold colours together – as has been a popular trend in recent times – Bigeni mixed neutrals with bright seaside blues and fresh tangerines. There were elegant cropped pants, striped sweaters, draped skirts and cuffed shorts. All pretty cool stuff.

As we know, media always watches media, and the following observations have been noted, and blogged all over town...some of the fashion industry's best-known bloggers, editors and other media and PR folks are in 'Sin City' Sydney to catch Fashion Week. Vogue's Tim Blanks, Filipino Bryanboy, UK blogger Susie Bubble and Australian model-turned-blogger Candice Lake have all been spotted sitting front row, and photographer and media agencies like AAP, Media Man, Fairfax Media and Splash News & Picture Agency have all been spotted in or nearby to all the action. We suspect many news media will be working to the early hours of the morning getting all their stories and pictures out for what looks to be an outstanding festival for the iconic fashion show of shows down under.

Louise Van der Vorst and Montana Cox were among the models who sported David Bowie inspired red mullet wigs and comical garments for the show were well... show stealers in the hearts and minds of many.

Luke Sales of Romance was Born said they had wanted to work with comics for quite a while.

"Our prints have always been photo-based and we wanted to do something more graphic with more pop which is what attracted us to comics," he said.

"We figured Marvel was the biggest and so simply asked if they wanted to come on board as a collaborative partner and they were thrilled.

"I think the partnership is perfect because our designs mirror the celebration of creativity and and imagination they are famous for."

The week began with a hick up or two for for celebrity blogger Bryan Boy however, who is attending for the week to report on Australian designers to his legion of loyal followers.

The superstar of the blogosphere was a highly anticipated front row star for the show, but after holding the runway for almost forty minutes they were forced to start without him.

Kirrily Johnston added hints of hints of acid brights to her signature neutral palette while Manning Cartell has forcast bold colours and prints to be a sure thing as the weather warms up.

The look was overwhelmingly inspired by the jet-setter lifestyle with new silhouettes including jumpsuits and playsuits. A jet-set feel was also paramount at the Dylan Cooper show, in his fashion week debut after winning on Project Runway last year.

Just off Mercedes Benz Fashion Week in New York, Whitney Port, star of reality television series The City, turned designer, gave an international flavour to the day. Port showed off her collections Whitney Eve and WE by Whitney Eve.

Closing off the opening day was Ginger and Smart who are celebrating their tenth year in the industry.