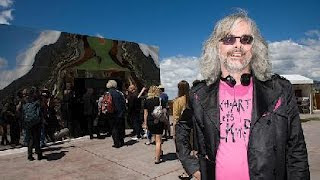 An honorarble mention in this year’s Rich 200 must go to David Walsh. While his estimated wealth falls short of the $210 million cut-off in this year’s ranking, the Taswegian stands out this year for his ability to make Australians feel uneasy.

It’s not just the contents of his Museum of Old and New Art (Mona), perched on the banks of the Derwent River just outside Hobart, with its excrement-producing Cloaca exhibit, display of human ashes and artist Chris Ofili’s The Holy Virgin Mary depicting the mother of Jesus surrounded by female genitalia and including elephant dung that will discomfort some.

It is the fact that in a year when arguments about gambling reforms have drawn vicious lobbying from the pubs and clubs industry and threatened to bring the machinery of parliament to a halt and when there’s growing concern about gambling generally that Walsh has so overtly used a fortune accrued from wagering to build a temple to art – celebrated by many of the same people who decry gambling.

In fact, the country’s largest private museum, which opened early last year, has contemporary Australian art fans salivating. Its contents include Sidney Nolan’s Snake, a 46-metre-long, nine-metre-high collation of 1620 different painted panels, and works by Brett Whiteley, Arthur Boyd, Charles Blackman and Russell Drysdale. Mona also treads solidly into ancient territory with the mummy and coffin of Pausiris and a cast bronze votive figure of Isis and the Infant Horus, from 600-300BC.

The public loves it. Mona drew more than 330,000 visitors last year – almost half from outside Tasmania. The collection is doing great things for tourism to the Apple Isle and for Australia as a whole.

“The only time I can think of in recent history that [we had] something this big, audacious, generous and gifted was probably in America,” Edinburgh Festival director Jonathan Mills gushed last year. “It’s the Getty, the Guggenheim, it’s on that level.”

And yet, revelations that Walsh’s $175 million project was funded in part by his friend and fellow gambler Zeljko Ranogajec, whose gambling syndicate makes money out of the rebates that totalisers give in exchange for placing large bets – reducing the pool of winnings for ordinary punters placing smaller bets – only adds to the unease.

It’s no doubt a contradiction the private Walsh enjoys. If he were a miner or industrialist, his generosity would be unambiguously celebrated. That’s the sort of background Australia has come to expect of its arts patrons. Still, taking from the poor and giving to middle-class causes is something state-owned lotteries have always done. Walsh could argue he is doing the redistribution more directly, by cutting out the need for a lot of grant applications. Or he might not.

“I invent a gambling system,” Walsh writes in the introduction to his book Monanisms. “Make a money mine. Turns out it ain’t so great getting rich using someone else’s idea. Particularly before he had it. What to do? Better build a museum; make myself famous. That will get the chicks.”

The extent of Walsh’s own fortune is unclear. He has a collection of properties in and around Hobart, one of which he co-owns with Ranogajec, along with the premium Moorilla Estate winery and vineyard and Moo Brew brewery.

It remains to be seen how Walsh views his own cash flow. Is Mona, with its stated $100 million worth of artworks, simply vanity spending? Is Walsh a patron in the traditional sense or should this be seen as an initial investment into a new realm of money-making ventures?

Features of the museum, with its iPod-based self-guide system, which explains exhibits while simultaneously collecting useful data for curators on what visitors are viewing and the length of time they spend at each artwork, along with a bar in the museum selling Moo Brew beers and Moorilla wines lend themselves to replication. A side project is the 10-day Mona Foma (Festival of music and art), which this year ran for the fourth time.

It may all be just another investment. The 50-year-old Walsh has already said in interviews he intends to exploit his high-profile attraction.

“I want to use Mona as a marketing tool to drive some products that I hope will make some serious money.” (Fairfax Media)