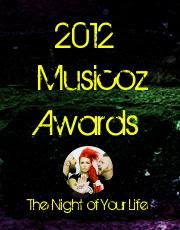 Each year, the awards highlight up and coming musical talent in 18 musical categories including singer, songwriter, alternative, blues, country and pop.

Musicoz is a national initiative dedicated to improving the quality of original music culture in Australia. Forover a decade Musicoz has been developing the music industry at the grass roots level by seeking out, recognising & encouraging the talents of unsigned and independent artists and providing them with much needed development support and opportunities as they carve out their careers.

Musicoz achieves these aims through:

Covering 18 genres of music with over 5000 entries each year. Known in the media as "The Unsigned ARIAs", The Musicoz Awards give vital recognition, exposure to a national audience through our TV special of the awards being aired on national Television, as well as development opportunities to finalists and winners and the opportunity to work alongside well known artist surrounding the awards evening. These awards are the biggest and most credible awards for unsigned and independent music artists in Australia. Our media partners include: BigPond Music, YouTube and Facebook.

Ongoing mentoring, artist development and support throughout the year as they develop their potential. The Program Includes:

Professional consultation on Presentation and image

Musicoz provides a range of benefits including:

Sick Puppies-Now a sensation in the U.S and signed to Roadshow Music.

The Sunpilots-No 1 indie band on Myspace, No 1 added band to commercial radio FEB 2008

Felicity Urquhart- 2007 Golden Guitar winner and No.1 video on CMC.

There is no other initiative across Australia that provides this form of support/benefits in the music industry.