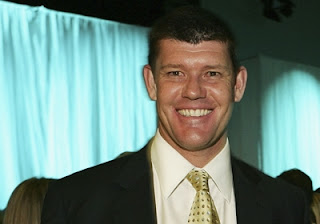 Billionaire James Packer's media company says it has had early talks on a possible takeover for the group, which owns a 25 per cent stake in pay TV operator Foxtel, worth about $1 billion.

Consolidated Media Holdings (CMH), which is 50.1 per cent owned by Mr Packer, made the comments in response to media reports that Mr Packer wanted to sell CMH, which holds the Foxtel stake as well as content-provider Fox Sports.

"CMH has had very preliminary discussions concerning a possible control proposal," the media group said, but added: "No control proposal or other form of offer has been made to CMH."

The company said it had hired UBS to act as adviser in case an offer emerges.

Media reports this morning suggested Mr Packer wanted to sell out of his media interests to raise cash to bid for casino group Echo Entertainment and its prize asset, Sydney's Star casino.
That would add Star to Crown, the Packer-run owner of Melbourne's Crown casino, to create a $10 billion gaming giant.

If Packer sells his half-share in Consolidated Media, his only Australian interests will be in free-to-air Ten Network, and Seek Asia, capping a selldown that started in 2007 when he offloaded the bulk of the family's PBL Media just before the financial crisis.

The sale of Channel Nine's east coast stations, ACP Magazines, Ticketek and 50 per cent of NineMSN to private equity firm CVC in mid-2007 was lauded as a top-of-the-market sale for Mr Packer, and a demonstration of his determination to shift the family fortune from media to gaming.

According to a previous report in The Australian Financial Review, Packer's "dream scenario" for the sale of ConsMedia is bidding tension betwen Nine, Seven and Telstra.

But a report from Macquarie today said UBS's appointment to sell Packer's ConsMedia stake suggests that demand for the media assets "may not be as strong as the market had anticipated" due to capital constraints at prospective buyer Seven and the requirement that all of Foxtel's shareholders - ConsMedia, News Ltd and Telstra - agree to a new ownership structure.

"The prevailing logic has been that corporate activity from one of the joint venture parties in Foxtel (Telstra, News Limited) or Kerry Stokes (Seven) would underpin the stock, with the monopoly Foxtel/Austar pay TV asset the ultimate prize," analysts Alex Pollak and Derryn Chin write.

"However, in our view, the fact that Packer appears open to selling down to institutions (thus sacrificing a control premium from a full takeover bid) implies that 1) liquidity to finance his gaming interests is of more concern to him and 2) he does not feel that a takeover offer is in the works any time soon."

Macquarie has a 'hold' recommendation on the company. Macquarie priced CMH at $3.27 per share, noting that the stock has "had a decent run due to the Austar merger and speculation about M&A activity."

Rupert Murdoch's News Corp, which owns 25 per cent of Foxtel, would likely have first rights to buy the Packer interest, the AFR reports said.

A News Corp newspaper quoted corporate regulator Rod Sims saying a sale of Mr Packer's 50.1 per cent stake in CMH to News Corp would be "less problematic" than a sale to Seven West Media, controlled by billionaire Kerry Stokes, or Foxtel's 50 per cent shareholder Telstra.

The AFR is owned by Fairfax Media, publisher of this website. (Reuters with Madeleine Heffernan)