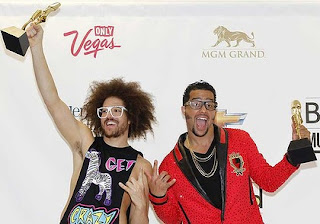 Adele and LMFAO were the big winners at the Billboard Music Awards in Las Vegas on Sunday, with the British soul singer snatching 12 trophies, including Top Artist and Top Female Artist.

LMFAO were the big winners at the ceremony, which Adele did not attend, claiming six awards - five for their 2011 smash-hit Party Rock Anthem and one for Top Duo or Group.

But few music fans will be talking about who won what after a string of spectacular performances and showstopping tributes to 2012 Millennium Awards winner Whitney Houston, Donna Summer and late Beastie Boys rapper Adam Yauch.

LMFAO kicked off the show with a high-energy medley of their 2011/2012 hits Party Rock Anthem, Sorry For Party Rocking and Sexy & I Know It, but it was Cee Lo Green's and Goodie Mob's return to Las Vegas and Jordin Sparks and John Legend's tribute to Whitney Houston that stood out as highlights.

Sparks landed one of the night's many standing ovations after performing a pitch-perfect rendition of Whitney's I Will Always Love You and Cee Lo and his rap posse also brought the audience at the MGM Grand Garden Arena to its feet with their rousing rendition of the Beastie Boys' Fight For Your Right (to Party).

The blind soul man, joking, "This is my time ... and I'm looking good too", then asked for a birthday gift from his duet partner and insisted she sing her Jay-Z collaboration, Empire State of Mind, a capella. Keys gladly obliged as Wonder sang, "You gave me my gift."

The singer then handed over the Icon Award to her personal icon, prompting the soul legend to drop his dark glasses and pretend to look at his trophy.

He said, "I can touch it and see it more than seeing it." Wonder urged fans to "commit yourselves to using your heart and joining with me to putting your best love forward ... and committing yourselves that if we come together and bring our hearts together for unity, we can change the world by being as one".

Aside from the stunning performances, there were award wins for Bieber, Perry, U2, Foster The People and Coldplay while Taylor Swift was named Billboard Woman of the Year and Lil' Wayne was crowned Top Male Artist.

The winners of the 2012 Billboard Music Awards: