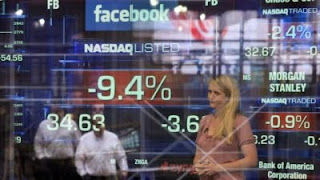 Facebook shares sank 11 per cent in the first day of trading without the full support of the company's underwriters, leaving some investors down almost 25 per cent from where they were Friday and driving others to switch back to more established stocks.

Facebook's debut was beset by problems, so much so that Nasdaq said on Monday it was changing its IPO procedures. That may comfort companies considering a listing, but does it little for Facebook, whose lead underwriter, Morgan Stanley, had to step in and defend the $US38 offering price on the open market.

Even so, one source said Morgan Stanley's own brokers were at one point "ranting and raving" about glitches that left unclear what trades had actually been executed.

Without a fresh round of defence on Monday, Facebook shares ended down $US4.20, at $US34.03, on the Nasdaq. That was a decline of almost 25 per cent from Friday's intra-day high of $US45 a share.

"At the moment it's not living up to the hype," said Frank Lesh, a futures analyst and broker at FuturePath Trading LLC in Chicago, adding that some people may have decided to hang back and buy the stock on the decline.

"Look at the valuation on it. It might have said 'buy' to a few people, but boy it was awfully rich," he said.

The drop in Facebook's share price wiped more than $US11 billion off of the company's market capitalisation – it became a sufficiently interesting pop culture story that even gossip website TMZ did a brief item Monday morning.

Volume was again massive on Monday, with nearly 168 million shares trading hands, making it by far the most active stock on the US market. Nearly 581 million shares were traded on Friday.

But the drop in the company’s share price was so steep that circuit breakers kicked in a few minutes after the open to restrict short sales of the stock, according to a notice from Nasdaq.

"One of the things that we are seeing in Facebook is a lot of emotional trading, in that over the weekend much of the media coverage was negative, and that could be weighing on investors' decisions to get out of the stock," said JJ Kinahan, TD Ameritrade's chief derivatives strategist.

Shares of other one-time Internet darlings fell in lock step with Facebook before rebounding on their own merits, with Yelp and Groupon rising. Zynga and LinkedIn remained down.

The news was not all bad, though, as the Nasdaq rose 2.46 per cent. High-profile tech stocks rose sharply, with Apple up 5.8 per cent and Amazon 2 per cent higher.

FuturePath's Lesh said some investors took money out of Apple to buy Facebook, and now could be going right back in to Apple given the lacklustre performance of Facebook thus far.

By mid-afternoon on Monday, though, there were indications that investors might be coming back in to Facebook. The stock was well off the lows of the morning, and some market players saw an entry point forming.

"We see 38 per cent of the ideas on Facebook are short and 62 per cent have a more long bias," said Tim Murphy, general manager for the Americas at TIM Group, which transmits and tracks equity trade ideas from 750 brokerage firms for institutional investors globally.

"Brokers are saying to their clients there is a good opportunity here."

Still there was a long list of questions – ranging from whether the underwriters priced the shares too high to how well prepared the Nasdaq was to handle the biggest internet IPO ever – and few easy answers.

"It was just a poorly done deal and it just so happens to be the biggest deal ever for Nasdaq and they pooched it; that's the bottom line here," said Joe Saluzzi, co-manager of trading at Themis Trading in Chatham, New Jersey.

Nasdaq said Monday morning the changes it was making would prevent a repeat of what happened Friday, when glitches prevented some traders from knowing for hours whether their trades had been completed.

The exchange also said it would implement procedures to accommodate orders that were not properly executed last week, which could ultimately lead to compensation for some investors.

"It doesn't instill confidence for clients. Talk about trying to convince them it isn't a casino," one Midwestern financial adviser told Reuters on Monday.

Separately, a source said Morgan Stanley's brokerage arm still had a "large number" of share orders from Friday that were not confirmed, which it was working to resolve.

A Facebook spokeswoman declined to comment on the share price issue, but some financial advisers, who might have been furious last week at getting left out, were counting themselves lucky by Monday that they did not get their clients involved.

"By pure luck I failed to talk it up with a lot of clients because I didn't think I would be able to get much," said one Raymond James adviser, who sought, and received, only 500 shares for one client.

"I basically told people they weren't going to get any, and luckily, it proved to be a bust," the adviser said. (Reuters)