The World's Most Spectacular New Year's Eve Party Just Got Even Better; 1 Day To Go 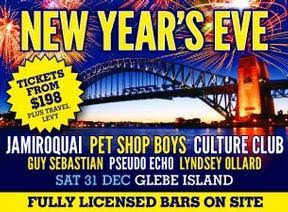 Last weeks announcement of alcohol bans across Sydney will ensure that those seeing in the New Year around popular party locations (parks, beaches and reserves) will have to do so with water, juice and soft drinks only due to a Sydney Council dry zone decision. However, Sydney Resolution patrons will not only be able to enjoy the very best in music and premium fireworks displays, but also icy cold beers, chilled wines, spirits and flowing champagne.

With unobstructed, stunning views of the city and the fireworks display, there is no better place to be on New Year’s Eve than Glebe Island. See 2011 out with a bang with some of the world’s biggest classic and contemporary artists, playing all the songs you know and love.

Sydney’s Glebe Island will turn into a ‘mini city’ for this very special event, with a custom-built venue providing the very best in entertainment and bars, an incredible on-site ‘village’ showcasing Sydney’s best local and international food, and a unique array of retail and market stalls.

Glebe Island is situated under the Anzac Bridge on the beautiful Sydney Harbour. All patrons will arrive and depart by ferry or bus service from terminals and wharfs provided by Sydney Resolution New Year’s Eve Concert.

Please note there is no parking at the event. Gates open at 2pm, entertainment commences at 4:00pm and all performances will conclude by 1:45am. Gates close at 3.00am.

JAMIROQUAI With more than 25 million album sales worldwide it’s fair to say that JAMIROQUAI are one of the UK’s most successful acts of any era. Fronted by the charismatic Jay Kay, JAMIROQUAI are coming down under for an electrifying live funk spectacular. JAMIROQUAI led the acid-jazz movement in the early ‘90s, later shifting to a unique mix of funk, soul and disco. Hits such as Cosmic Girl, You Give Me Something, When You Gonna Learn, Virtual Insanity, Little L and Love Foolosophy all formed the sound of a generation. With a seventh hit album, Rock Dust Light
Star, JAMIROQUAI show no sign of stopping, as they dust off their moves for an exclusive show at Sydney Resolution New Year’s Eve Concert.

CULTURE CLUB were at the forefront of the New Romantic movement, and one of the defining music acts of the 1980s. CULTURE CLUB – Boy George, Roy Hay, Mikey Craig and Jon Moss – had an incredible seven Top 10 hits in Australia including Do You Really Want To Hurt Me, Karma Chameleon, Church Of The Poison Mind and The War Song. Don’t miss this rare opportunity to see CULTURE CLUB in all their original glory. The songs are timeless, the voice is unique and the band is still one-of-a-kind.

PET SHOP BOYS - Neil Tennant and Chris Lowe - are electronic dance-pop pioneers and one of the world’s bestselling artists. PET SHOP BOYS have sold more than 100 million records worldwide and had 17 Top 40 hits in Australia, and continue to set the charts and dance floor on fire with dance and pop classics like West End Girls, It’s A Sin, Go West, What Have I Done To Deserve This and Always On My Mind. Fans at Sydney Resolution New Year’s Eve Concert can expect a one-of-a-kind show from the PET SHOP BOYS, who are reproducing their theatrical stage performance – including the major video and dance component – that was created in 2009 at London’s O2.

GUY SEBASTIAN is undoubtedly one of Australia’s greatest singer-songwriters. His first solo single, Angels Brought Me Here, debuted at number one and was the fastest-selling Australian single in ARIA chart history. Add to this his string of awards and the fact he is the only Australian male artist in Australian music history to achieve five chart-topping singles
– including Angels Brought Me Here, All I Need Is You, Out With My Baby, Like It Like That and Who’s That Girl? – and you can see why GUY SEBASTIAN is not to be missed this New Year’s Eve.

PSEUDO ECHO pioneered the new ‘80s electro-pop sound in Australia and quickly established themselves as one of the country’s most successful and influential bands with Top 10 hits such as Listening, A Beat For You, Don’t Go, Living In A Dream and their iconic cover of Lipps Inc’s Funky Town. Since forming in 1982, the band have had album sales in excess of one million worldwide, a Top 10 single on the Billboard US pop charts and a number one single on the
Billboard US dance charts. In 2011 PSEUDO ECHO’S relentless party groove continues to resonate with musicians and fans alike, so get ready to keep groovin’ with some energy this New Year’s Eve!

LYNDSEY OLLARD is an English-born recording artist who splits her time between the Australian Northern Beaches and her UK home. Her debut album, One Night Stand, is eclectic and witty with a combination of catchy beats, haunting melodies and at times hilariously dry lyrics – from the tongue in cheek pub anthem Wasted, through to the heartbreaking tribute Too Young To Die.