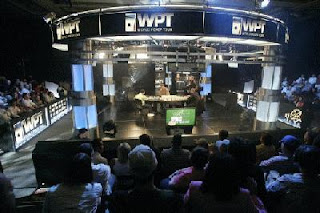 Andrey Pateychuk probably felt extremely lucky to even be at the World Poker Tour (WPT) Prague final table. This year’s European Poker Tour (EPT) San Remo Main Event champ found himself all-in with A-K late on Day 3, only to see his opponent flop a set of 9’s. The poker gods were with him, though, as he hit a runner-runner Broadway straight to double-up and eventually head to the final table in the third spot with over 2 million chips. He was still 4 million chips behind the chip leader, Stanislaw Kretz, and 2.5 million behind Benjamin Pollak, but no matter. Pateychuk ran through the final table Monday to win his second major tournament in less than two months, raking $630,263 in the process.

When the final table began, here was what the landscape looked like:

As might have been expected, Russell Carson was the first to go. Having already lost some chips, he moved all-in pre-flop with 5-5 and Kretz made the call with Q-9. Kretz took the lead on the 9-6-3 flop, though the 8 on the turn gave Carson a shot at a gut-shot straight. It wasn’t to be, though, as the river blanked and Carson was eliminated in 6th place.

About a half hour later, Sigurd Eskelund raised pre-flop to 125,000, Pateychuk took it up to 285,000, and then Eskelund shoved for 1.46 million. Pateychuk quickly called, revealing pocket Jacks. Eskelund had K-Q and the race was on. The flop came down Q-8-6 and Eskelund was in control. Turn: 8. And then…the magical two-outer on the river for Pateychuk. With a rivered Jack, Pateychuk made a full house, shocking Eskelund and sending him home in 5th place.

Play didn’t necessarily slow after that, but it wasn’t for almost three hours that another player was eliminated. Adria Balaguer and Benjamin Pollak both got all their chips into the middle pre-flop, Balaguer with A-T and Pollak with J-9. The flop of J-7-4 put Pollak in the lead with top pair. And then, just like what happened to Pateychuk the previous day, Balaguer made runner-runner Broadway to snatch the pot away from Pollak, as well as many thousands of dollars.

The biggest hand for Pateychuk before heads-up came just before the dinner break. He raised to 200,000 pre-flop, only to see Kretz three-bet him to 560,000. Pateychuk did him one better, four-betting to 980,000, and rather than folding or just going all-in, Kretz called, creating one heck of a pot. Both players checked after the K-9-2 flop, but not after an Ace fell on the turn (which also created a flush possibility) – Kretz bet 1 million chips and Pateychuk made the call. Despite all that action, both players checked the 3 on the river. Pateychuk turned over pocket Kings for a flopped set and Kretz simply mucked. Pateychuk took the chip lead at that point with just over 6 million.

Not long after dinner, Kretz’s downfall was completed. He got it all-in after a Pateychuk raise and was called by the chip leader. Kretz held pocket 9’s, putting him ahead of the A-6 of Pateychuk. And now, since it’s Pateychuk, let’s skip to the river: an Ace. Kretz was knocked out in 3rd place, sending Pateychuk into heads-up play against Balaguer with a small lead, 8.004 million to 7.8 million.

Less than half an hour into heads-up, it looked like a Balaguer victory was imminent. Both men went all-in pre-flop and this time, Pateychuk couldn’t get lucky with A-5 versus Balaguer’s 8-8. When the smoke cleared, Balaguer had a huge lead, 15.63 million to just 1.5 million.

Within a few hands, another lucky river and some aggressive play gave Pateychuk back the lead, but soon thereafter, Balaguer brought it back to even. Appropriately, though, Pateychuk regained the lead for good when he outflopped Balaguer with A-6 against A-J. Really, at this point, Balaguer had to know that he had no chance. Pateychuk was playing good, aggressive poker, but with lady luck on his side, there was no stopping him.

On the final hand, Pateychuk raised pre-flop, Balaguer moved all-in with Q-Q, and Pateychuk called with A-5. Since this is the final hand, you can guess what happened. The flop was an all-spade 9-7-4 and, of course, Pateychuk held a spade. But that didn’t matter. The turn was a 3 and the river was a 2, giving him the wheel at the WPT Prague title. (Credit: Poker News Daily)

An increasing amount of online poker players are also checking out online casino offerings from Bwin.Party Digital Entertainment. New casino players currently get up to $3000 sign up bonus, understood to be the highest bonus in the world for new players.

Bwin.Party Digital Entertainment Co-cEO Jim Ryan has gone on record advising PartyCasino will soon feature more Hollywood blockbuster themed slots. A few in the know journalists and media agents have been recently tipped off that an all time classic movie adaption will be showcased in the PartyCasino portfolio within 1 month. PartyCasino has the world's most impressive line up of Hollywood themed games, and more are just around the corner.

PartyCasino.com and PartyPoker.com customers can also benefit from rewards and bonuses via PartyPoints and the Palladium Lounge.