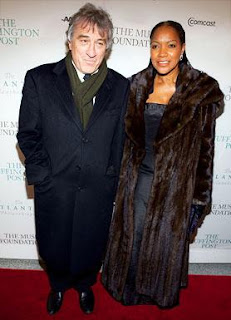 Actor Robert De Niro and his wife Grace Hightower became the proud parents of a baby girl born via a surrogate on Friday 24th the actor's spokesman confirmed.

The child is the second for De Niro, 68, and Hightower, 56, and has been named Helen Grace Hightower De Niro.

The Meet the Parents and The Godfather Part II star married actress Hightower in 1997, and the couple have a son, Elliot, born in 1998.

The actor can currently be seen in the star-studded, feel-good film New Year's Eve.

De Niro is acknowledged as one of the greatest actors of all time.

Best 5 Gangster Movies Of All Time...

Gangster movies are as cool as ever. In Australia we have to settle for Underbelly, Underbelly Razor (now in an Uncut DVD set), and then there was Dirty Deeds (collecting money from pokie dens et al) from a few years back. Gangster movies serve as history, entertainment and commentary. With a combination of violence, betrayal, power and family, it is no surprise gangster movies are so popular. Here's our Top 5 Gangster Movies of all time.

Oliver Stone wrote the screenplay and Brian De Palma directed this movie that reflected the violent chaos that cocaine brought to Miami in the late 70s and early 80s. Al Pacino gave an epic performance as Cuban immigrant turned drug lord, Tony Montana. Lots of violence, done in a way that makes the movie even better.

“Casino” was written by Nicholas Pileggi and directed by Martin Scorcese. It is based on the real life story of Frank "Lefty" Rosenthal, but the protagonist’s name was changed to Sam "Ace" Rothstein. Robert DeNiro, Joe Pesci and Sharon Stone give excellent performances and Robbie Robertson did an excellent job providing the music for the movie. You don't have to be a fan of gambling to appreciate this classic movie.

Directed Francis Ford Coppola and written by Coppola and Mario Puzo, “The Godfather” is an epic tale of the fictitious Corleone mafia crime family and their struggles. Marlon Brando gives the performance of a lifetime and Al Pacino is amazing in his break out role.

Nicholas Pillegi wrote and Martin Scorcese directed this real life story of mafia affiliate, Henry Hill. With its raw depiction of criminal life, “Goodfellas” takes away whatever romance and glamour that other movies have attributed to mob life.

Again written by Mario Puzo and directed by Francis Ford Coppola, “Godfather II” expands on the original by both going forward and backward, covering the origins of the original Godfather, Vito Corleone. The epic tale shows how crime took down Cuba and features great performances by Pacino and DeNiro as well as Lee Srassberg who played the Meyer Lansky based character, Hyman Roth.