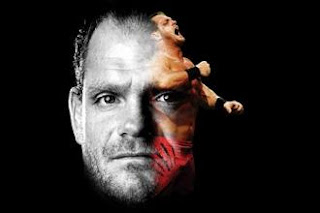 Many Australians, and fans around the world, known and love professional wrestling - aka "sports entertainment"... especially WWE style, but there is a dark and serious side to the industry - the massive toll the business often takes on its in ring performers.

In the upcoming biopic on the late Chris Beniot, the finger is not so much pointed at the WWE, nor should it be, but it covers and investigates his life and death in what is largely seen as a fair and balanced capacity.

SRG Films have announced plans to adapt a biopic based on Matthew Randazzo's book "Ring of Hell: The Story of Chris Benoit and the Fall of the Pro Wrestling Industry".

It may sound at least a touch sensationalized, but the real life and death story of former WWE Champion Chris Benoit was pretty bizare, even by pro wrestling standards.

For over a decade, Benoit was the poster child of what a professional wrestler should be, however with the murder suicide that all changed and these days his story acts as fodder for those who look to discredit the professional wrestling industry. Professional wrestling may be scripted, some punches may be pulled, taking falls can be practices, but as the WWE promos say 'The Dangers are real' and they are trained professionals. Concussions from the pseudo sport aka "sports entertainment" are all to real and commonplace and have little to do with WWE Mattel Toy or THQ - XBox360 b2b deals.

Entitled "Crossface", the thriller pic explores the situations former WWE superstar Chris Benoit faced throughout his wrestling career. A combination of drug-use, depression, and head trauma made him increasingly difficult to handle and ultimately lead to Benoit killing his wife and young son before committing suicide. The strange set of circumstances made headlines all around the world, and many insiders believe it further encouraged the WWE (and to a lesser extent other wrestling promotions) take better care of their trained professions. There were good financial, political and public relations reasons to look after the performers better. This is something that wrestling legend and former Mayor of Minnesota, Jesse "The Body" Ventura, and his friend in wrestling, "Rowdy" Roddy Piper, had been campaigning for, long before Benoit's death was added to wrestling's shameful body count.

The last high profile death of a wrestling legend was that of Randy "Macho Man" Savage, made into a household name thanks to feuds with the likes of Hulk Hogan, Andre The Giant and Ricky "The Dragon" Steamboat. Savage died in a car accident, but the heart attack is what is understood in medical circles as to what caused him to swerve off the road, and into a tree. It was no secret that Savage too was a steroid abuser for much of his career, but to blame wrestler's deaths on steroids alone is naive. The deaths are often a combination of things, such in Benoit's case.

Sarah Coulter turned in a first draft in mid-October. Dale Alexander Carnegie is producing and shooting will begin next Fall.

It is not known if the producer had considered having Hollywood star Mickey Rourke ('The Wrestler') appear in Benoit story. Most in the professional wrestling industry firmly believe that Rourke has done at least a modest amount of steroids over the years, and of course some of Rourke's drug abuse is well documented. To Rourke's credit, he has cleaned up his act and it appears he will be around for a good while longer before his number comes up.

Chris Beniot performed in Australia, including in Sydney and Newcastle under the AWF banner in 1993, and his matches were considered the best on the card by both hardcore and casual fans.

The name Chris Benoit is never mentioned in the WWE - TV, online, print, DVD et al, and WWE top brass Vince McMahon has formally named Benoit as "a monster", but many feel that is a generalisation and that the tragic circumstances of Benoit's life and death involved a complex set of circumstances, some that will never be fully understood.

The WWE has an excellent Wellness policy, including rehab, and offers both current and former WWE Superstars free of charge rehab assistance for any wrestler who applies.

A Media Man spokesperson said: "Don't expect the WWE's Vince McMahon to get behind this picture the way they got behind and plugged into 'The Wrestler' that stared Mickey Rourke, nor should they. Benoit spent some of his time including the last number of his wrestling years with the WWE, but to blame the tragic circumstances of his life and that of his family on the WWE alone would not be fair. The case has been the topic of much investigation from the medical profession for many years and will continue to be one of the most documented hard news stories in professional wrestling history. Many fans and media alike look forward to much more positive coverage of the form of entertainment they love - sports entertainment. The film - see it if your a fan but know you will be learning more about the dark side of the industry...one it would prefer didn't exist. Education is a key to learning in society, so perhaps the film should be must see viewing for fans, wrestlers, wrestling promoters and news media across the globe".