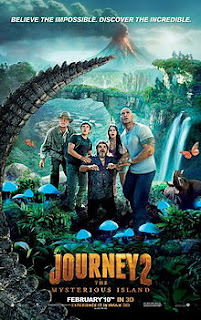 Vanessa Hudgens (Suckerpunch and High School Musical) and Josh Hutcherson (Journey to the
Centre of the Earth and The Hunger Games) are heading down under to Australia for their new film Journey 2: The Mysterious Island.

The tour lands the duo in Melbourne first for the world premiere on Sunday the 15th of January
before they adventure to Sydney for a red carpet premiere on Tuesday the 17th of January.

Journey 2: The Mysterious Island begins when young Sean Anderson (Josh Hutcherson, reprising
his role from the first film) receives a coded distress signal from a mysterious island where no
island should exist. It’s a place of strange life forms, mountains of gold, deadly volcanoes, and more than one astonishing secret.

Unable to stop him from going, Sean’s new stepfather, Hank (Dwayne Johnson), joins the quest.
Together with a helicopter pilot (Luis Guzman) and his beautiful, strong-willed daughter (Vanessa Hudgens), they set out to find the island, rescue its lone inhabitant and escape before seismic shockwaves force the island under the sea and bury its treasures forever.

The folks at Village Roadshow (Australia) are well organised and friendly, so the Melbourne and Sydney premiere's are "don't miss" attractions, from both a news media and fan perspective.

The movie tagline is 'Believe the impossible. Discover the incredible.' We suggest you do the same and get yourself to the premiere and the cinema for a journey you won't soon forget.