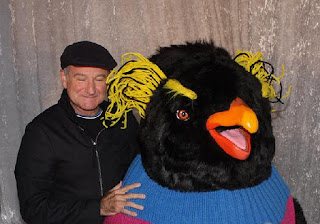 The Happy Feet Two Australian premiere took place at Moore Park, Fox Studios this afternoon, and it was happy feet galore as celebs did the white carpet, with snowflakes flying around all of us.

Sydney has gone head over heels for Mumbles, Erik and Lovelace, and they would just love to see you and your family see their film when it opens in Australia on 15th December.

Even the Sydney weather got in the mood for the movie with a bit of an Arctic chill in the air.

The sequel to the animated smash-hit Happy Feet reunites the Academy Award winners to the magnificent and super cool landscape of Antarctica, this time in 3D.

Mumble’s tiny son Erik is choreo-phobic. Reluctant to dance, Erik and his friends run away where they soon meet The Mighty Sven – a penguin who can fly! Mumble has no hope of competing with this charismatic new role model but things are about to get worse when the world is shaken by powerful forces. Erik soon learns of his father’s guts and grit as Mumble brings together the penguin nations and all manner of fabulous creatures – from tiny Krill to giant Elephant Seals – to put things right.

Mumble's son, Erik, is battling to realize his talents in the Emperor Penguin world. Meanwhile, Mumble and his family and friends discover a new threat their home - one that will take everyone working together to save them.

Other than Robin Williams the film also features the voices of Elijah Wood, Hank Azaria, Alecia Moore (P!nk), Brad Pitt, Matt Damon, Sofia Vergara, Common, Hugo Weaving, Richard Carter, Magda Szubanski, Anthony LaPaglia and Benjamin “Lil P-Nut” Flores Jr. We think Williams genius saves this film from being pretty average - keeping in mind we know how awesome Williams and Miller can be when they are at their best.

Robin Williams told Music News Australia on the difference between voice acting and traditional acting: "It feels free". On feelings about media and the style of movie "Well, it's very different from One Hour Photo", which got a great reaction from the press pack - especially the snappers.

Australian producer, director and writer George Miller said of the film when asked about creative and financial success: "It was so rewarding. The film should do really well and its in 3D this time also". When complimented on his one of one interviews with today's press and asked about if he would even be open to a Foxtel - StudioTV 'Dinner With Five' concept where producers, directors and actors all sit down for dinner and discuss the business, taped for television he said "I haven't actually seen that but it sounds interesting". Further quizzed Miller said: "I guess I would be open to that".

Miller said getting so many big names on board was "a great privilege and very humbling".

The Mad Max director said he already had the story for Happy Feet Two in his mind before they had finished the first one and it was an easy decision to jump straight into the sequel.

"When you work on a film like Happy Feet, the characters become part of you, they're like imaginary friends in your head, they're like family," he said.

"And it's such a rich world to work in, it was very,very easy to get into it."

The buzz and excitement for Williams was so much today that almost a dozen TV media asked Williams for autographs, and he happily obiliged, so we joined in the fun two. Yes, media are also fans (not just critics).

Some of the best reviews like the one done by Richard Corliss reads"....Miller is not content to duplicate the pleasures of his first penguin film; he dares to go bigger, deeper, higher — happier."

Don't forget it's 3D, so if you have a foot fetish or whatever, you're in for a wonderful treat. Love the close ups of beaks too.

Round up the kids of all ages and step on down to Happy Feet Two. 4.5 out of of 5 paws (because we're huge Robin Williams and George Miller fans). Well organised from our friends at Village Roadshow too. 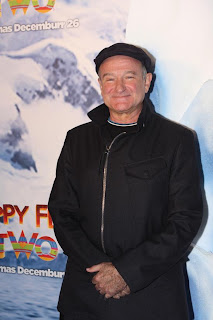 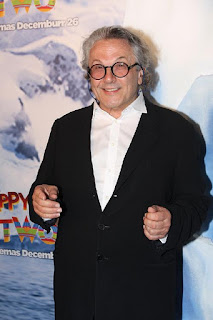