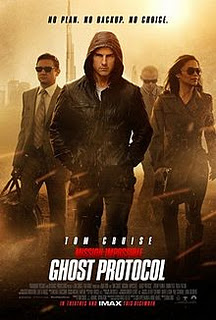 It's Mission Accomplished for "Mission: Impossible."

Christmas Day was especially strong. On Sunday alone, "Mission: Impossible" grossed an estimated $13.6 million, No. 2 "Sherlock Holmes: A Game of Shadows" grossed $9.6 million, No. 3 "Alvin and the Chipmunks: Chipwrecked" grossed $4.5 million and No. 4 "The Girl With the Dragon Tattoo" grossed $5.6 million.

The strong Christmas weekend was welcome, particularly after a miserable few weeks at the box office.

Several high-budget, high-profile movies debuted in the days leading up to Christmas.

Among them: Sony's "Dragon Tattoo," a two-hour 40-minute hard-R film that opened Tuesday evening and missed expectations for the four days, and Steven Spielberg's PG-rated motion-capture animation "The Adventures of Tintin." That movie opened Wednesday and is in fifth place for the long weekend.

Most of the numbers matched expectations for Christmas Day, but there was a surprise: Steven Spielberg's PG-13 World War I epic "War Horse" opened to a particularly robust $7.5 million on Sunday. The DreamWorks picture is expected to gross another $7.5 million on Monday.

Considering that Disney, which distributes for DreamWorks, figured the movie would pull in $6 million over both days, the number is especially impressive.

Sunday's other new movie, Summit/New Regency's PG-13 sci-fi thriller "The Darkest Hour," opened to $3 million -- in line with studio projections. That movie, which the audience polling company Cinemascore gave a harsh "C-plus" grade, is expected to gross $5.5 million through Monday.

And opening in limited release, Warner Bros.' "Extremely Loud an Incredibly Close" debuted at six locations in three cities Sunday, grossing $71,861 -- a per-location average of about $12,000.

"There's a lot of good cheer going on around the industry -- at least for this weekend," Rory Bruer, Sony's distribution chief, told TheWrap Monday morning. "Certainly, leading up to it hasn't been that great, but it feels very good right now."

His studio's "The Girl With the Dragon Tattoo" -- one of the most anticipated movies of the year -- was in fourth place for the four day period, taking in $12.75 million over three days and $19.4 million over four. That's just below expectations.

The movie, directed by David Fincher and starring Daniel Craig and Rooney Mara, has grossed a total of $27.7 million and had a budget estimated at about $100 million.

Sony had figured the movie would take about $13 million over the three days and in the low-to-mid $20 million range for the four days.

Still, Bruer said the film "is off to a good start and it's just going to get better with every day through the rest of the holiday season and well into the new year."

"Mission: Impossible -- Ghost Protocol," which cost an estimated $145 million to make, grossed $29.5 million over the three days from Friday to Sunday and $46.2 million from Friday to Monday. That gives the Paramount/Skydance movie a domestic total of $78.64 million and an international gross of more than $150 million.

"M:I:4," directed by Brad Bird, is playing at 3,448 domestic locations in its second week of release.

That movie, directed by Guy Ritchie and starring Robert Downey Jr. and Jude Law, cost about $125 million to make. It opened to $39.6 million on Dec. 16.

The film opened in first place on Dec. 16. Warners notes that "Sherlock" is now the highest-grossing domestic film of December.

The studio's "We Bought a Zoo," which opened on Friday, meanwhile, was in seventh place for the four days, grossing $15.6 million.

Cameron Crowe wrote and directed the movie, which stars Matt Damon and Scarlett Johansson. It is about a father who -- as the name implies -- who buys a struggling zoo in the countryside and, with his family, tries to renovate and reopen it.

Chris Aronson, Fox's head of domestic distribution, told TheWrap that 41 percent of the movie's audience was younger than 25, while 59 percent was older.

Younger audiences loved the movie, he said, giving it a Cinemascore of "A-plus." Its overall score was an A.

"Now people are available to go, and they're going to start discovering how wonderful this movie is," Aronson said. "There are a lot of satisfying movies in the marketplace, and now people have time to go see them."

Disney is expecting the same out of "War Horse."

Like "Dragon Tattoo," it is long -- nearly 2 1/2 hours -- which means fewer screenings per day than shorter films.

Despite the length and subject matter -- it's about a horse during World War I -- it did well across the country.

"It's not often that you get to say that Moore, Oklahoma is your second-biggest grossing theater," Hollis said. "It feels like we're going to be the family choice for the week, which will again set us up for a great five, 10 more days of business."

"War Horse" is the second Spielberg movie now in release.

The first is "The Adventures of Tintin," based on the Belgian comic books.

Paramount's movie, which had a budget of $135 million has grossed more than $240 million internationally, and received a Cinemascore of "A-minus."

Here are the top 10 movies of the four days:

"Alvin and the Chipmunks: Chipwrecked" ($20m)