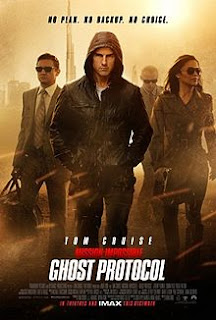 Tom Cruise's Ethan Hunt goes on a rampage to clear his organization's name in Brad Bird's first live-action film, and Bird does a fine job.

Mission: Impossible — Ghost Protocol, does the 16 year old franchise franchise justice and is not a let down.

You've got the winning formula of American agents trying to stop a villain who thinks that a nuclear winter is the way to go.

IMAX teamed up with Paramount Pictures, Cruise and Bird really hits the spot.

Bean counter types - did you know the franchise has netted in $1.4 billion to date.

Media and fans in Moscow and Dubai are lapping it up, but will Cruise take the journey down under to Australia to promote the flick? Time will tell, but we're hoping our friends at Paramount Pictures Australia will give it the nod.

Ethan could be compared to The Amazing Spider-Man, given all the stunts and all on buildings, and the secret is out that Cruise likes to do most of his own stunts. How much CGI and other visual effects were used, we may never know, but this flick will sure keep one guessing.

The tagline is No Plan. No Backup. No Choice. You have a choice as to if you will see this film, and we suggest you do. Most of the Mission: Impossible games of all variations are worth checking out also, so check Bwin.Party Digital Entertainment's PartyCasino and the official Mission: Impossible website today for more information. Did we mention Cruise has stopped mentioning Scientology? 4 out of 5 stars taking everything into account.