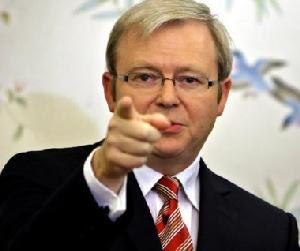 Kevin Rudd says he has never asked any MP to speak to Clubs Australia about pokie machine reforms and has categorically denied claims to the contrary.

"The claims are entirely untrue," a spokesperson for Mr Rudd said in a statement late Wednesday.

"The Foreign Minister has never asked any MP to speak to Clubs Australia at any time on any matter relating to poker machines.

"The Minister would consider the publishing of such a claim as defamation, and would take action accordingly."

The former foreign minister's comments come after the Seven Network aired a statement on Wednesday night by Clubs Australia that claimed the lobby group had met with an MP "close to Kevin Rudd" in November last year.

AAP contacted Clubs Australia late on Wednesday night following the report and was sent a copy of statement.

"Clubs Australia did meet with an MP close to Kevin Rudd in late November which was specifically to discuss the issue of mandatory pre-commitment," Clubs Australia spokesman Jeremy Bath said in the statement.

"It was made clear at that meeting that Kevin Rudd was sympathetic to the concerns of clubs and as Prime Minister he would kill mandatory pre-commitment.

"Clubs Australia was encouraged to continue the campaign and was advised that we should target a select number of MPs.

In the Seven Network report on Wednesday, Labor backbencher Alan Griffin reportedly confirmed that he had met with Clubs Australia in November, but he denied he was acting on behalf of Mr Rudd.

Mr Griffin reportedly also told the network that he did not mention Mr Rudd during the meeting.

Mr Griffin told ABC Radio on Thursday he met with Clubs Australia twice - including once in his Parliament House office late in 2011.

He said Clubs Australia was visiting a number of MPs at the time.

Mr Griffin said he expressed "concerns about the policy and how it might operate" and the fact there was considerable consternation within the Labor caucus about it.

But he denied he gave a guarantee that if Mr Rudd was re-elected prime minister he would kill the pre-commitment scheme. (Credit: AAP)