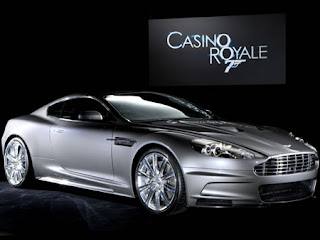 From Bondi Beach, Sydney, Australia to the UK, Hollywood and beyond, the world knows of the James Bond franchise, as well as his famous cars... especially the Aston Martin.

Australia's most famous beach is understood to be home to at least a dozen Aston Martin's, but we know some owners like to hide they away, rather than to show them off, with some locals preferring to hide their wealth these days.

A bit of history... It was the Aston Martin Silver Birch that featured in the James Bond movie “Goldfinger”.

It is considered to be the most famous car in the world. Ok, so the car has never received an Oscar or other movie award, the DB5 has continued on since Goldfinger to enjoy the spotlight in a number of James Bond movies.

It went on to star in such great James Bond films such as Thunderball, GoldenEye, Tomorrow Never Dies and Casino Royale.

007 just wouldn’t be the same with the appearance of such as famous co-star as the Aston Martin DB5. It has been seen on the latest James Bond movie set, shooting scenes for Skyfall. It will be the first time that the DB5 has appeared complete with super spy gear since Sean Connery manned the wheel in the movie Goldfinger.

The latest Aston Martin DB5 has kept its exceptional styling.

Under the hood quite a bit of work has been done. It hosts a DOHC straight six engine that gives more than 400 horsepower. Telescopic shock absorbers keep the drive smooth, and it can go from 0 to 60 miles per hour in 7.1 seconds.

Finally, a convertible is also available with an additional steel hard top.

Collectors will be checking out both the car and new Bond movie very closely.