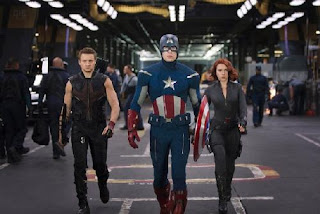 Hollywood is continuing its lover affair with superhero themes, movie revamps and the like, and Australian fans are lapping it up with the superhero jackpot bonanza.

This year we're looking at a bush tucker bag of sequels, prequels, remakes... you name it. The Hollywood studios will be pumping out their best efforts in order to make as much money as they can muster, and who can blame them.

Entertainment kingpin Marvel Entertainment are going to be spinning out their “The Amazing Spider-Man”, hitting us hard with "The Avengers", "Ghost Rider" is about to ride into "Sin City" Sydney, Australia, and then there's Australia's favorite son, Hugh Jackman back in "The Wolverine".

The Warner Bros. - DC Comics tag-team is going to attempt to combat that Marvel onslaught with the next instalment of Batman - "The Dark Knight Rises", but most tipsters are picking Marvel to win the movie superhero fight over DC Comics this year, but time will tell.

Here’s a peek at some of this year’s coming attractions...(US dates)

Nicolas Cage provides a winter warm-up with “Ghost Rider: Spirit of Vengeance” (Feb. 17), returning as the bounty hunter from hell on a mission to rescue a child from the devil.

Next is “The Amazing Spider-Man” (July 3), with Andrew Garfield taking over as Peter Parker in director Marc Webb’s new take on how a mutant spider bite turns a teen into a web-slinging hero.

Christian Bale returns as Batman in “The Dark Knight Rises” (July 20), director Christopher Nolan’s third and final tale of the well to do vigilante with all the cool gadgets. Anne Hathaway joins the cast as Catwoman.

After the late Heath Ledger’s Academy Award-winning performance as the Joker in “The Dark Knight,” Nolan went with a lesser-known villain: This time, it’s Bane (Tom Hardy), known to comic-book fans as the brute who breaks Batman’s back and puts him in a wheelchair.

The Avengers are assembling...

Disney released more stills from its superhero superteam movie reving up fans who are eagerly awaiting the answers to the age-old question, who would win in a fight between The Incredible Hulk and The Mighty Thor.

"When you walk out of your trailer and you bump into Chris Hemsworth with the cape on and you see Downey in the Iron Man suit and that’s when you really get excited and you start geeking out a bit,” Evans told The News last year from the film's New Mexico set.

Fans are already starting to geek out, more than two months before the film's May 4 (U.S) release date.

The Marvel Studios movie, which is directed by fanboy favorite Joss Whedon, unites three franchises (Iron Man, Thor, Captain America and The Hulk) within an even bigger franchise that’s expected to be one of the biggest box office hits of all time.

Marvel Studios presents in association with Paramount Pictures “Marvel’s The Avengers”--the super hero team up of a lifetime, featuring iconic Marvel super heroes Iron Man, the Incredible Hulk, Thor, Captain America, Hawkeye and Black Widow. When an unexpected enemy emerges that threatens global safety and security, Nick Fury, Director of the international peacekeeping agency known as S.H.I.E.L.D., finds himself in need of a team to pull the world back from the brink of disaster. Spanning the globe, a daring recruitment effort begins.

Starring Robert Downey, Jr., Chris Evans, Mark Ruffalo, Chris Hemsworth, Scarlett Johansson, Jeremy Renner and Samuel L. Jackson, and directed by Joss Whedon from a screenplay by Joss Whedon, “Marvel’s The Avengers” is based on the ever-popular Marvel comic book series “The Avengers,” first published in 1963 and a comics institution ever since. Prepare yourself for an exciting event movie, packed with action and spectacular special effects, when “Marvel’s The Avengers” assemble in summer 2012.


Andrew Garfield as Spiderman Featured in an Avengers (English, 2012) Cameo...

Mumbai, Feb 13, 2012 - A few days ago we reported the rampant Internet rumor that Andrew Garfield’s Spiderman would be featured in an Avengers cameo. All of this was built off a statement made by actress Jenny Agutter who has a small role in the Whedon production. Well, we’ve stumbled across another source who confirms Spider mans cameo in Avengers.

“This will be similar to how Wolverine made a quick cameo in X-Men: First Class and Sony’s going to make sure to promote their new Spiderman movie any way they can. Andrew (Garfield) isn’t a widely known actor so they want to get his face on everything, including The Avengers even if it’s for a couple seconds.”

This is an absolute multiple bonanza for the superhero fans.

Starring Robert Downey Jr., Chris Evans, Mark Ruffalo, Chris Hemsworth, Scarlett Johansson, Jeremy Renner and Tom Hiddleston, with Stellan Skarsgård and Samuel L. Jackson, and written and directed by Joss Whedon, “Marvel’s The Avengers” is based on the ever-popular Marvel comic book series “The Avengers,” first published in 1963 and a comics institution ever since.


The Wolverine Gets Release Date...

It is official, a sequel to that 2009 X-Men Origins: Wolverine movie will be coming to a theatre near you on or around July 26th 2013 (depends if your in the U.S, Australia or elsewhere). After months of production delays, including replacing Darren Aranofsky as director, that cigar smoking, 'bub' saying, furry Canadian Logan will once again rip things up. The film sequel is running with the title: The Wolverine and will take Logan to Japan where he finds a forbidden romance and the Silver Samurai to deal with. Hugh Jackman has already praised the script as being "one of the best we've ever had." This is good news for those fans and critics who felt the first Wolverine movie offering could have been better. We trust that director James Mangold and Hugh Jackman deliver on this to keep both Marvel hardcore and casual fans happy. What the critics will think is anyone's guess, but as a few stars have noted - movies are made for fans (not critics).

The new "Ghost Rider" movie's ticket sales are not very strong, but the controversy raging in the comic-book community is like a mega fireball.

The story begins back in 1972, when the flaming motercyclist was created at Marvel Comics by writer Mike Friedrich, editor Roy Thomas and artist Mike Ploog. Comics creators in those days - and often today - don't own anything they create for the major publishing houses, because of a contract called "work for hire." But when the first "Ghost Rider" movie came out in 2007, Friedrich sued Marvel for partial ownership of the character on a technicality - which would result in a windfall from the movie.

He desperately needed the money. Friedrich, now 69, is unemployed, broke and suffering from liver problems. He has been getting through the days by selling autographed "Ghost Rider" items at conventions as a paid guest, which according to documents amounted to a total of $17,000.

But ownership of trademark and copyright isn't something that comics publishers take lightly. Both of the major comic publishers (ala Marvel and DC Comics) make more income from licensing their library of characters than they do selling comic books. Here's the thing: According to U.S. law, failure to defend a trademark can lead to losing it.

So Marvel - and parent company Disney - went after the lawsuit, including a countersuit demanding the $17,000. They were victorious. In December, the court threw out Friedrich's suit and ordered him to pay Marvel. Also, his future income was constrained, in that he can sign and sell only "Ghost Rider" material that he buys retail.

The creative and fan community responded with fury. Blogs across the Internet excoriated Marvel, or started petitions for the $17,000 to be forgiven. Steve Niles, creator of "30 Days of Night," led a charge on Twitter and set up a Facebook page for contributions (www.steveniles.com/gary.html). Creators such as Gail Simone ("Batgirl") and Jill Thompson ("Scary Godmother") tweeted encouragement. Longtime creators'-rights champion Neal Adams was one of many who auctioned original art, with proceeds going to Friedrich.

As you might expect, there were calls to boycott the new film, "Ghost Rider: Spirit of Vengeance." That might have contributed to the film's disappointing third-place finish on its opening weekend in the U.S, with $22 million at the U.S box office.

If the movie did well, it would still be overshadowed by the back story - comics creators and fans rising up like a tidal wave to help one of their own.

What a red hot and real superhero story.

If it sounds like 2012 is going to be a pretty good year for superhero movies, both on an entertainment front (for fans) and business angle (for studios etc), that's because it is. Enjoy brigadiers, and as Marvel living legend Stan Lee would say - Excelsior!