Murdoch to launch Sun on Sunday next weekend - 20th February 2012 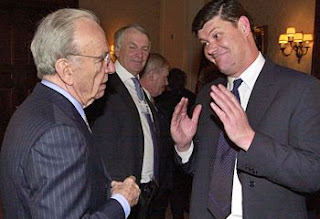 The Sunday version of Rupert Murdoch's top-selling British tabloid The Sun will hit the shelves for the first time next weekend, the Australian-born media tycoon's News International has announced.

"Rupert Murdoch said during his visit on Friday that a new Sunday title would be published 'very soon' - and that is a week from today," said an internal memo sent to staff at Murdoch's company.

The Sun's website ran a story saying the paper, called The Sun on Sunday, will be launched on February 26.

News International closed down its News of the World Sunday tabloid last year after revelations of widespread phone hacking by reporters.

At the time both Mr Murdoch and his son James said there were no immediate plans to launch a Sunday paper to replace the News of the World.