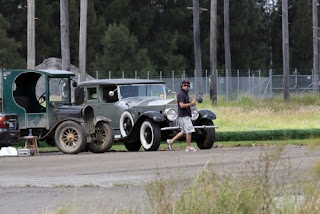 Today it was almost all hands on deck at the old site of the White Bay Power Station in Sydney's Rozelle, as about half a dozen classic cars rolled up and down The Great Gatsy set.

Producer / director Baz Luhrmann (fully recovered from his hitting his head on the boom just before Christmas) was spotted, as was plenty of security officers, a few technical folks, a bus boy, a "dogs body" and a few good looking honey wagons. The only apparent news media anywhere within a stones throw was us.

It was great to see Gatsy back in our own backyard, last month doing shooting at Manly - the northern beaches region of Sydney, with the odd scene also being completed at Fox Studios, Moore Park. We should also mention that we're not convinced that the Blue Mountains location shoot ever happened, as it was a rumour that started on the Sydney sets, but make your own minds up when you watch the movie - due to hit the big screen in Australia this coming December.

We must say that the reconstructed upper class gardens, manicured lawns, complete with water fountain, that the Gatsy hands on crew put together look just fabulous. Water sprinklers were going at full blast on the lawn set to ensure the grass maintained its lushness - reserved for fine folks like the Gatsby's.

Dozens of shots of classic cars and bikes featured in the flick were secured today.

We were glad to hear that some of the movie cast and crew took time out to frequent a couple of local cafes in the area, with crew today ducking into Balamin's Cafe 2041, and last week even Leo and friends popped into a cafe at Lilyfield. Great to see Gatsby sharing the wealth with local business enterprise.

If you blinked and missed it, we can report that Leo and a number of ANTMs were spotted at the exclusive Beach Haus nightclub at Kings Cross last Friday night.

Our spies think that Leo may have already moved forward from his Victoria's Secret model girlfriend Erin Heatherton. There was no sign of the said model. She's the lass who made a public appearance with DiCaprio last December last year at a UFC event at Luna Park

Australia's Next Top Model third-placed Simone Holtznagel was there, along with Montana Cox, Holtznagel was seen chatting to DiCaprio throughout the night.

Leo wore his baseball cap backwards, as per usual, and instead of hiding in the corner all night as hi often does, this time he hopped up on the couch for a brisk dance.

"He seemed pretty chilled. He was mostly texting on his Blackberry but Holtznagel was definitely the standout of all the girls trying to get his attention," advised a leak. "And she was one of the few girls he really spoke to."

With girls gave plenty of attention to not only DiCaprio, but also Haas.

It's been said "Lukas and Montana left together. Leo was a little more discreet. He left unaccompanied just after 3am and a few minutes later Simone left too."