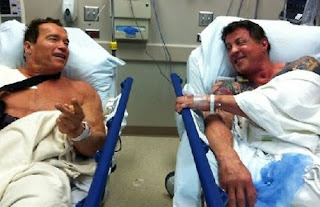 From the golden sands of Bondi Beach, to our Sydney International Airport, in Hollywood and in just about every other part of the world, the names Arnold Schwarzenegger And Sylvester Stallone are synonymous with action movies, but at the moment they are both sharing a surgery room.

Yeah, action heroes sometimes needs to take time out to heal their wounds, "The Terminator" included.

Arnold Schwarzenegger, 64, and Sylvester Stallone, 65, just got matching shoulder reconstructions and tweeted a photo of the pair in (separate) beds during their hospital stay.

It was stunt-related injuries that happened on the set of The Expendables 2 that did the damage.

In the original The Expendables it was WWE Superstar and pop culture legend "Stone Cold" Steve Austin that broke Sly's neck (for real), but these aging real life superheroes just keep coming back for more punishment.

Movie fans fear not - Arnie and Sly will soon be co-starring in another action flick entitled The Tomb.

Schwarzenergger penned on the the photo for the world to read:

@Schwarzenegger After all the action, stunts & physical abuse shooting The Expendables 2 and The Last Stand, it was time for a little tune up on my shoulder. Look who was coincidentally waiting in line behind me for his shoulder surgery. Now we're ready for another round of great times and action when we shoot The Tomb. #greattobeback say.ly/ePS1oo4

The announcement of the pair’s new film alongside the hospital photo lead some media commentators speculating the picture could be simply a publicity stunt.

A Media Man spokesperson said "I wouldn't put it beyond Sly and Arnie to orchistrate an elaborate publicity stunt. They were masters of generating massive puplicity and hype decades ago before other movie types jumped on the bandwagon. Whatever the case, well done to the Hollywood tag team. What's next? WWE WrestleMania together, with a Stone Cold stunner thrown in their for good measure - we can only hope so".

The fact Stallone also appears to have a syringe sticking out of his neck also lead some folks to suggest it was a spoof.

In their latest project, The Tomb, Stallone will play a fella who designs an inescapable high-tech prison, who becomes a prisoner after being double-crossed.

Schwarzenegger will play a friendly fellow inmate who helps Stallone in his quest.

Arnie and Sly have done numerous business projects together including in the gaming, igaming and hospitality business.