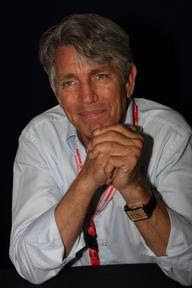 The Supanova pop culture expo enjoyed its final day in Sydney, Australia, today and celebrated actor Eric Roberts made a rare media and public appearance for the lucky fans who made the effort to track him down out to Olympic Park, Homebush, in Sydney's west.

Lines of hundreds of fans lined up to meet and greet their favourite actors from popular culture and news media jockeyed for position, showing their credentials to get the exclusive scoops.

Many fans and media types agreed that Eric Roberts was the creme of the crop from today's celebrity bunch, while some fans were happy just to take the opportunity to dress up as their favourite pop culture character.

The 3 day pop culture mania brought together fans, actors, game players, information and tons of merchandise and collectibles. Make no mistake - this is big business, but also lots of fun. It brings out the kid lurking inside all of us, no matter what our age.

Witnessing the general public dress up as their favourite hero, heroine or monster was just as much fan as the official exhibitions.

Coming out to the expo joining in the fun (and big business) are over 40 international stars from various shows, films, franchises and worlds.

The real life superheroes of Australian pro wrestling - AWF Wrestling turned up again and put on some very solid chain wrestling and brawling to the delight of the crowd. The wrestlers were also a big favourite with the media.

Our Hero is no longer Expendable. Eric Roberts is “The Master” of Supanova!

In a career spanning five decades, Eric Roberts has become recognisable to millions of film and TV fans. He has appeared in almost 200 movies and in countless TV shows including Heroes, The Drew Carey Show, Frasier, Oz, Touched By An Angel, Law & Order: SVU and even in a Doctor Who telemovie as the Doctor’s nemesis, The Master.

He has filmed in over 17 countries, including Australia (in The Coca-Cola Kid), and received critical acclaim for his performances in Star 80, It’s My Party and Truman Capote’s In Cold Blood. In 2008, Eric joined the cast of Batman: The Dark Knight as Gotham gangster Sal Marone; in 2010 he appeared alongside Stallone, Lundgren, Statham and Li in The Expendables.

Fans of comics and animation know him as the voice of Mongul in the Justice League cartoons. He’s such a familiar face that he has appeared as himself in 63 productions, often making light of his notoriously chequered movie-star lifestyle. Brother to Julia Roberts and father of teen actress Emma Roberts, Eric is a true Hollywood veteran.

He’s therefore also the perfect guest to kick off festivities for Supanova’s TENTH ANNIVERSARY at the Sydney expo, in addition to the Perth expo the following weekend, with an exclusive Q&A and special appearance at each of our Friday evening Preview Nights which are exclusively for full weekend ticket holders (SUPA FAN PASS), in helping us celebrate a decade of successful Supanova Expos; something we couldn’t have done without your wonderful support.

Eric will then spend the weekends meeting fans, signing autographs and posing for studio portraits. (Supernova)


Special guests appearing at Supanova Sydney and Perth include:

Great to see the cool AC/DC pinball machine getting a workout from the fanboys. Look out for the Australian Pinball Championships as part of their promo.

Thank you to all involved in the promotion and success of Supanova. We look forward to seeing you all again next year. As Marvel Comics living legend Stan Lee says, Excelsior!