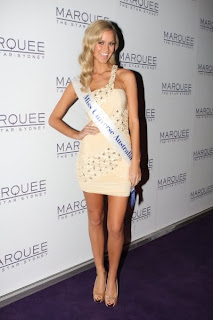 Our take on things...

Echo Entertainment is apparently more about entertainment than gambling these days, casino tie in or not, and tonight its party time at The Star. This is most assuredly worth taking a gamble on. There's a strong chance that by the time you stop parting you would have had an absolute blast.

They have hosted countless international acts and acted as home to the Hollywood and Las Vegas stars where they come down under to Sin City Sydney.

Seems a nature that the new Miss Universe Australia, Renae Ayris, and friends should be in the celebrity mix to show their faces on a Friday night at The Star.

They continue to push the celebrity card, and then there's the nightclubs, bars, slots, games and The Darling - the 5 star hotel. It's all there for the taking. Work hard and play and party harder.

Danver and photography lover from Perth has been crowned Miss Universe Australia.

Renae Ayris has been voted the nation's most beautiful woman and presented with a $30,000 Temelli Jewellery crown at a black tie event in Melbourne (9th June 2012).

She narrowly edged out Melbourne woman Mary Vitinaros, who was named runner-up.

The night saw some of Australia's most beautiful women take to the stage in swimwear and evening gowns before judges declared a winner.

Melbourne's hopes of a local winner were buoyed when two of the final five included Melbourne woman Mary Vitinaros and Victorian Julia Perrott-Clarke.

Ms Perrott-Clarke won the crowd over after facing a controversial question from former news presenter Naomi Robson about her views on gay marriage.

"I believe that everyone should have equal rights whether it be marriage or any other factor," she responded.

"Everyone has their own opinion and if it doesn't infringe on anyone else's rights then I think it's a great thing."

Shouting her final reply she ended by saying.

Strutting their stuff in evening gowns in front of a crowd in the hundreds in the Melbourne Sofitel's Grand Ballroom the finalists wowed the room.

Thirty-three national finalists battled it out for the title, with the winner to go on to compete in the international Miss Universe pageant in December.

Everything is a blur - Miss Universe...

Ms Ayris said it was watching Scherri's experience as Australia's Miss Universe that inspired her to enter the pageant this year.

"I've always watched but last year I followed it really closely because Scherri was in it, she's actually a friend of mine," Ms Ayris said.

"I was so excited for her to hand me over the crown."

Dressed in a navy and silver cocktail dress by Perth designer Ruth Tarvydas, the 21-year-old blonde looked bright and fresh on Saturday despite having not slept a wink the night before.

The life-altering announcement still hadn't sunk in when she fronted the media for her first official press call as Miss Universe Australia.

"I'm so overwhelmed still, everything is just a blur from last night," Ms Ayris gushed.
"I'm going to wake up one morning and say,"Wow I'm Miss Universe Australia'."

The Miss Universe competition was the model's first time in a beauty pageant, but she has taken a shot at fame before.

She is an avid dancer who auditioned for a role in Baz Luhrmann's Academy Award-winning film Moulin Rouge!.

"I got down to the very last cut but I was too young," she said.

Being crowned Miss Universe Australia will open up other avenues to Ms Ayris.

As part of her duties she will be acting as the charity ambassador for Operation Smile, a children's medical charity dedicated to improving the lives of children in developing countries born with facial deformities.

Another official responsibility will be to represent Australia in the international Miss Universe pageant in December.

There have been two Miss Universe title-holders from Australia, with Kerry-Ann Wells claiming the title in 1972 and Jennifer Hawkins in 2004.

The Star's tag line is 'There will be stories', and its a sure bet Star will keep living up to that if tonight was any indication. A casino matched with Miss Universe Australia, a media pack with snappers all trying to get the models attention, so you can just imagine.