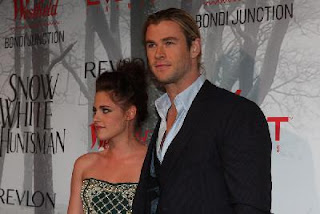 Kristen Stewart, Australia's own Chris Hemsworth and a swag of other celebrities attended the Sydney premiere of 'Snow White' at Bondi Junction in Sydney earlier this evening.

Hundreds of fans and dozens of news media covered the event for the movie which is tipped to be a big money winner and a favorite with critics.

Well done to everyone involved in the success of this hot new Hollywood movie.

Australian star Chris Hemsworth has been enjoying some time off back home with his family, ahead of the Australian premiere of Snow White And The Huntsman.

On a rare day-off the former Home And Away star took the opportunity to go for a surf, despite the cold weather.

He was also photographed with his shirt off taking a dip in the pool at the Park Hyatt.

Hemsworth's acting career has taken off in Hollywood with recent appearances in super-hero blockbusters Thor and The Avengers.

He credits much of his success to his parents, who always supported his career. "When most people said it (acting) is crazy ... they said, "The couch will always be your spare bedroom ..." Hemsworth told the Seven Network's Sunrise program on Tuesday.

The new father also said he gained a lot of experience with children from babysitting his manager's kids and his older brother's three children.

"We were around kids a lot," Hemsworth said.

A release date for the film hasn't been set but we understand it will be in time for the 2013 Oscars.

Snow White and the Huntsman