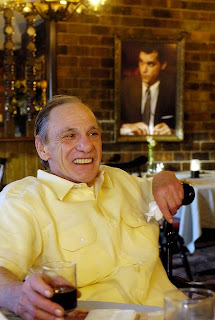 Henry Hill, who has died aged 69, was a mobster whose nefarious exploits with the Lucchese family on the New York crime scene of the 1970s were made famous by the Martin Scorsese film Goodfellas (1990).

In the film, an adaptation of the book Wiseguy by the journalist Nicholas Pileggi, Hill, played by Ray Liotta, is the narrator and central figure, running the gamut of mob crime over a 25-year period from 1955.

Among many other misdeeds, he dangles a tardy loan repayer over the lion's den in a zoo and helps organise a robbery at JFK airport in New York, known as the Lufthansa heist, which nets millions but results in a bloody feud between the thieves.

But though Hill's real-life criminal career was steeped in blood, he insisted that he never "whacked" anyone himself. "I never killed anybody," he said last year. "I was a money man." He did, however, confess to burying "a lot of bodies". As for the film, he was happy to admit that it was "99.9 per cent dead on". His character's opening line is: "As far back as I can remember I always wanted to be a gangster."

Henry Hill was born on June 11 1943, one of eight children in a poor family in Brooklyn, New York. His father, also Henry, was Irish-American, while his mother, Carmella, was of Italian extraction. Henry Jr's mixed heritage meant that he could never become a "made" man in the Mafia, a status which offers certain protections and privileges.

He began his criminal career innocently enough, running errands for Paul Vario, a capo in the Lucchese family who ran a cabstand near the Hills' house. But soon Henry was being given glimpses of the mob lifestyle, learning how Vario ran loan sharking operations and protection rackets. He was awed by the easy money on display.

By the time he was 14 he had dropped out of school, and his position with Vario was formalised when he was made a member of a local construction union, which allowed him to collect a salary for a no-show job. He became a youthful mascot for the Vario crew, which included Jimmy Burke, the charismatic and brutal gangster played by Robert de Niro in Goodfellas.

Henry's first major crime came after he was ordered to put a rival cab rank out of business. Smashing his way into the opposition taxis, he doused them in petrol and set them on fire. But he was not arrested for the first time until 1959, when he attempted to buy goods with a stolen credit card. He was soon released, however, and his unwillingness to talk during his detention only added to the affection in which he was held by the Vario crew.

For three years, between 1960 and 1963, Hill served with the 82nd Airborne Division of the US Army. It is not clear whether this was an attempt to "go straight", but in Wiseguy Hill claims that the move to Fort Bragg was made to wait out the "heat" of police attention.

On his return to New York he duly picked up the threads of his old life, enjoying the perks of the mob life. Perhaps the most celebrated scene in Goodfellas is a single shot which shows Hill and his girlfriend Karen (later to be his wife) bypassing the long queues outside the Copacabana nightclub by greasing many palms until they are sitting right in front of the stage. "What do you do?" she asks him, dazzled. "I'm in construction," he lies.

In 1972 Hill and Burke went to jail, sentenced to 10 years for extortion. But life inside did not dent his mob career. Hill peddled drugs and made books and, in 1978, was released for good behaviour.
Back on the outside Hill, along with Burke and Tommy DeSimone (played in the film by Joe Pesci), made ever more money, notably robbing trucks and fencing stolen goods. But as the stakes grew higher, so the mutual mistrust and fear of betrayal, never far beneath the surface, rose. "The money," Hill recounted in an interview recently, "was unbelievable. We never robbed nothing small."

The biggest job of all, the Lufthansa heist of 1978, started with Hill. He had previous experience of robbing the cargo terminal at JFK airport, having stolen $US420,000 in 1967 with DeSimone from the poorly-secured Air France lot. Eleven years later a Lufthansa worker at the airport, with serious gambling debts to a bookmaker called Martin Krugman, revealed that the airline regularly moved millions of dollars in cash destined for US servicemen in Germany. Krugman told Hill, and Hill told Burke, who planned the theft, to be carried out by a team that once again included DeSimone.

It was a success beyond the gangsters' wildest dreams. They scooped more than $US6 million, a sum now equivalent to $US20 million, making the robbery one of America's biggest ever. Within days, however, the fallout had begun. With the FBI scrutinising their every move, the robbers assumed one of their number would crack, and began to turn on each other. Edward "Stacks" Parnell, a getaway driver who had failed properly to dispose of his truck, was the first to go, shot on December 18, a week after the raid. Over the next six months, at least eight more mobsters connected with the robbery would die, as Burke launched a vicious campaign to stamp out potential "rats".

As the body count mounted, Hill feared he too would be "whacked". He escalated his drug dealing, and - a cardinal sin in the Mafia - eventually became addicted himself. It was this business that got him arrested, in April 1980. When the police moved in, they played Hill wiretaps of his erstwhile allies in the mob, Vario and Burke, discussing the need to kill him. Hill, who had said that he would rather "put a gun in my mouth" than become a "snitch", recognised that "the whole crew were homicidal maniacs" and agreed to become an informant.

His evidence helped secure 50 convictions, earning Hill and his family a place in the Witness Protection Program. That is where Goodfellas ends, with Hill looking out of a bland housing lot in Omaha. In fact, his life subsequently remained anything but placid. The Mob continued to hunt him. One of the 10 moves he had to make was completed with just a few hours' notice. On each occasion Hill would have to assume a new identity. Peter Haines and Martin Todd Lewis were two of the names he used.

His problems with drink and drugs endured. He was arrested in 1987 on drugs charges and, though he recognised that the FBI "kept me safe when I didn't know how to keep myself safe", he left witness protection in the early 1990s.

He reassumed the name Henry Hill, but few of his adversaries were left to track him down. Vario had died in 1988, and Jimmy Burke was in jail, where he would die in 1996. None the less, Hill was always looking over his shoulder for "some punk kid trying to make a rep for himself".

The money had all gone. "The government said a couple of hundred million dollars went through my hands," he revealed. "But I just blew it on slow horses, women, drugs and rock-and-roll. We partied five, six nights a week and I was making $US15,000 to $US40,000 a week. But I was a degenerate gambler. I could lose $US40,000 in a week."

He made several hundred thousand dollars from Goodfellas and turned himself into something of a consultant for mob films and television series. Recently, when asked if the Mafia might kill him, he replied: "The mob? They don't care about me anymore. Are you kidding? They send me their scripts and treatments to sell in Hollywood."

He continued to be a victim of his various addictions, making regular visits to the tables at Las Vegas and having to check in and out of drying-out clinics. Unlike many of his fellow mobsters, however, he died in bed, in a Los Angeles hospital.

Henry Hill married, in 1965, Karen Friedman. They divorced in 2002, and he subsequently married Kelly Alor and then Lisa Caserta. He is survived by a son and a daughter of his first marriage.