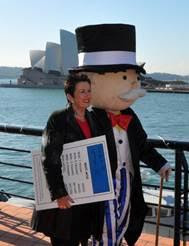 Sydneysiders will no longer need to “Pass Go” on the streets of London to collect $200 with the announcement today that Sydney city is to be immortalised with its very own official MONOPOLY board.

Not only can Sydneysiders look forward to playing the world’s best loved game on iconic Sydney streets and landmarks, they can also have a say as to what hot properties will make it onto the first ever Sydney MONOPOLY board. Before any dice are rolled the game’s makers will be consulting locals to ascertain which city landmarks should be selected to swap places with the famous London locales.

Sydney’s proudest resident, Lord Mayor Clover Moore became the first to “like” the Sydney MONOPOLY Facebook page when it went live today before giving her thoughts on what she’d like to see on the board.

The Lord Mayor said a global city like Sydney deserved to be immortalised in the world’s most famous game and said, “Sydneysiders are fiercely proud of our great city and its iconic places like the Sydney Opera House and Oxford Street.”

“I’d encourage everyone to have their say about which Sydney streets should replace those famous London names like Fleet Street and Pall Mall.”

“I think our beautiful high streets like King Street in Newtown, Glebe Point Road and Oxford Street should fill these squares. And of course, our plans to transform George Street will make it a globally recognisable landmark that deserves one of the top spots.”

It is not just places but people hoping to score a guernsey on the new MONOPOLY board and to this end, Gary Rohan from Sydney Swans was on hand to receive the good news that his team will be part of the game. He said “In 2012, the Sydney Swans are celebrating 30 years in Sydney as an integral part of this city’s sporting landscape. To be included on this iconic board game and Sydney’s first ever Sydney MONOPOLY is a great privilege for us.”

From today until June 24th MONOPOLY enthusiasts are invited to nominate Sydney properties via the Sydney MONOPOLY Facebook page at http://www.facebook.com/sydneymonopoly or by emailing info@winningmoves.com.au. The most popular two places will then be given the prestigious dark blue Mayfair and Park Lane positions on the original London MONOPOLY board. There will also be lots of other twists and changes too, including Sydney themed ‘Community Chest’ and ‘Chance’ playing cards.

Winning Moves, manufacturers of the official MONOPOLY Sydney version, under license from Hasbro, says the game will be on shop shelves in time for this Christmas.

Winning Moves Business Development Manager, Reid Herbert, says, “We are looking forward to receiving input from MONOPOLY fans far and wide so that we can ensure Sydney MONOPOLY is a real reflection of all that we love about Sydney.” He added, “The spirit and shape of this customised edition will remain the same as with the traditional game but now you will be able to buy and own your favourite Sydney landmark for MONOPOLY money.”

MONOPOLY first hit shop shelves in 1935 – and since then has been played by more than 500M people. Today it is played in 111 countries and enjoyed in 43 different languages. The new MONOPOLY: Sydney Edition will be available in November from leading toy retailers across Australia. MONOPOLY © 1935, 2012 Hasbro. All Rights Reserved.